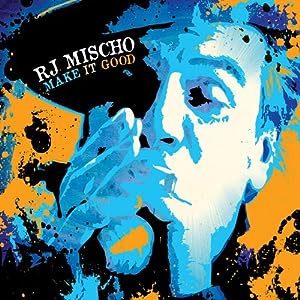 RJ Mischo is a musician whose abilities on his instrument can be utterly mind-boggling. But Mischo’s instrument is the harmonica, and his chosen genre (though many would say the music chooses the man) is the blues. World-wide fame and untold riches seem unlikely; to quote Fats Domino, “Ain’t that a shame …”

For his tenth recording Mischo’s gone for a raw, raucous sound, his harp tone dirty and distorted and many of his vocals the same. Most tunes feature a full band consisting of guitarists Johnny Moeller and the late and sadly missed Nick Curran, with veterans Wes Starr on drums, Ronnie James Weber on upright and electric bass, and Nick Connolly on keys. Two tunes – the menacing title track and instrumental “Up To The Brim" – feature Mischo’s ‘two-man band,’ with Jeremy Johnson handling guitar, bass drum, and hi-hat. (Richard Medek adds drums on the former).

Mischo wrote all the material, as usual showing a reverence for solid, no-nonsense blue shuffles like “Minnesota Woman” and “The Biscuit Is Back” and wildly inventive compositions like the whoop ‘n’ holler exuberance he brings to “Papa’s S.T. Special” or the two-part "Arumbula," with its voodoo-jungle beat and spooky vocal exhortations. There’s also the hard-driving “Frozen Pickle,” with Connolly’s cheezy-cool organ interlude a highlight, and the flat-out rock ‘n’ roll of “Elevator Juice,” the disc’s other two instrumentals.

The band is uniformly excellent throughout – rock-solid rhythms, and Moeller and Curran (who passed in 2012 at the tragically young age of 35) are slashing Texas guitar slingers intuitively adept at complimenting each other. And then there’s Mischo, with a roaring, raunchy amplified harp tone and the kind of exquisite control that renders the humble acoustic harmonica among the most expressive of instruments. He’s positively on fire, his playing innovative and his vocals – many through the harp mic for distortion – are full of passionate swagger and thoroughly convincing.

Despite impeccable instrumental contributions, there’s a rough-and-tumble feel to the record thanks to production with lots of bleed and dirt around the edges – everything sounds cranked up to vintage overdrive levels, and the energy is palpable.

Mischo’s been at it for over thirty years now, and his professionalism, care and craft are on ample display here. What’s important, though, is that Mischo’s enthusiasm and exuberance remain undiminished, and Make It Good burns with primal passion and all-consuming urgency.