Rod Piazza And The All Mighty Flyers - Almighty Dollar

The Flyers live up to their new “All Mighty” billing

After many years and countless gigs, Rod Piazza’s got himself a new band.  The core players are back, of course – Miss Honey on piano, guitarist Henry Carvajal, and drummer Dave Kida – but this time out, rather than The Mighty Flyers, they’re billed as 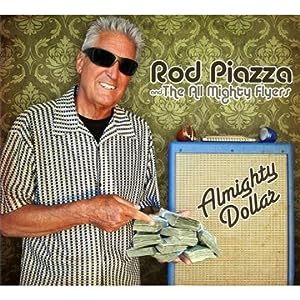 “The All Mighty Flyers.”

It’s an important, if small, distinction.  As one of the harmonica’s greatest virtuosos, Rod remains up front.  But there’s a real band feel to this outing, albeit with lots of guests along for the ride.  It’s primarily a covers collection – Piazza only wrote two of the dozen tracks – and missing entirely is a piano-based boogie, a staple of previous Flyers outings.  (Honey Piazza is one of the finest blues piano tinklers around).

The sound remains familiar – Piazza’s tone is distinct, Carvajal’s swaggering guitar is well within vintage-sounding West Coast tradition, and guests Norm Gonzales (electric) and Hank Van Sickle (acoustic) add thumping, jumping bass to ensure things swing at any speed.  There are horns on select tracks, and as usual there are a handful of truly left-field selections – in this case the Raylette-style vocals on “What Makes You So Tough” and the 50’s doo-wop of “We Belong Together.”

Elsewhere, though, it’s a mix of hard-core Chicago style twelve-bars (including two Little Walter tunes) and the bouncier fare that gives Piazza a chance to show what a genuinely innovative harmonica player he is.

The trick these days when doing ‘traditional’ material is to make it fresh without diminishing the music’s emotional punch, and Piazza shows a sure hand with arrangements that add unexpected textures and fills.  Drummer Kida is a huge part of the equation – he’s absolutely brilliant, busy yet never obtrusive, with a big beat and lots of little surprises.  Miss Honey provides sparkling support, her piano an integral part of the instrumental tapestry on grinders like “Ain’t Nobody’s Business” and “Confessin’ The Blues,” and her rippling ivories the driving force on “Wine Wine Wine.”

Piazza’s contributions this time out are the working musician’s lament of “Almighty Dollar” and the house-rocking’ “Con-Vo-Looted” that closes the disc with an instrumental romp.

The horns are handled by Johnny Viau, while Rusty Zinn adds guitar on a handful.  Rod turns the vocal mic over to Johnny Dyer for a pair (Muddy Waters’ relatively obscure “Loving Man” and “Confessin The Blues”).  One assumes band democracy lead to Carvajal’s vocals on “We Belong Together” – sadly, he simply lacks the pipes to handle lead vocals, and it’s the disc’s only weak track (a pattern repeated from the band’s last recording).

Every incarnation of the Flyers (either All Mighty or just plain ol’ Mighty) has had its strengths, and Piazza, old pro that he is, makes it all seem disarmingly easy.  All in all, though, this is one of the strongest collections in the band’s extensive discography, with sturdy material, innovative yet tightly focused arrangements, and truly top-notch ensemble playing.  Essential stuff!