For better or worse, Sugar Blue will forever be known as the guy who contributed the remarkable harmonica to the Rolling Stones’ 1978 smash hit “Miss You.” But despite the buzz and subsequent renown, Blue (real name James Whiting) has never really broken out as leader – born in New York but based for many years in Paris, a handful of 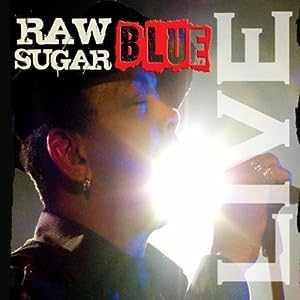 releases on European labels failed to stir much interest in North America, and even a pair on venerable Alligator Records failed to reach a wide audience.

Raw Sugar Live – a two-disc set showcasing Blue as leader – shows why. There’s no doubt Blue is an utterly masterful harmonica player. Astonishingly fast, he consistently tosses off lightning-fast riffs with unerring articulation and seemingly effortless ease.His band is incredibly tight and funky, anchored by the relentless drumming of James Knowles and the dazzling fretwork of Rico McFarland.

Indeed, it’s impossible to overstate just how accomplished Blue is on the harp – he’s been referred to as ‘the Jimi Hendrix of the harmonica,’ and indeed seems to share the guitar genius’ proclivity for experimentation coupled with mind-boggling abilities that all but defy human limitation. Yes, he’s that good.

There’s more than ample proof to be found on Raw Sugar – instrumentally, Blue is positively on fire, and he’s matched step-for-step by then-fiance-and-now-wife Ilaria Lantieri Blue on bass, the aforementioned Knowles on drums, with keys provided by Damiano Della Torre.He’s generous enough to provide lots of solo space, particularly to McFarland (another player of prodigious technical prowess who simply can’t be confined to a single genre). But when he cuts loose, particularly with his patented high-end pyrotechnics (made possible through circular breathing), he literally redefines the diatonic harmonica’s possibilities.

Material is a mix of originals and familiar fare, though Blue makes even the hoariest chestnuts his own; his “Hoochie Coochie Man” is slinky and full of funky life, and he’s simply all over “Messin’ With The Kid” with quicksilver solos that consistently amaze and astound. Not surprisingly, “Miss You” is here, beginning, as Blue puts it, “like I did it – somewhat – with the Stones,” and ending with the band’s own frenetic spin. There are a couple of ‘bonus’ tracks – the extended (over 14 minutes) blues workout of “Bad Boys Heaven” and the jazzy “Lip Service And Lies.”

The band’s take on Muddy Waters’ “One More Mile” owes much to James Cotton, while Blue takes a solo turn for “Another Man Done Gone,” a highlight of the collection. Whiting’s own compositions - a few co-written with Lantieri – don’t quite measure up. “Cotton Tree,” a tribute to the harmonica pioneer, comes across as well-intentioned jazz-lite; Blue’s harmonica tone an attack are nothing like Cotton’s, and his vocals are simply inadequate. “Bluesman” is a pedestrian exercise with such verbal bon mots as “I’m a bluesman, that’s what I am / If you don’t like it I don’t give a damn.” And “Walking Alone,” again no doubt well-intentioned, is cringe-worthy both lyrically and vocally – Blue can handle straight blues well enough but he’s no melodic singer, and here he’s so far off key so often it’s hard to believe he’s in the same country much less on the same stage as the band.

Vocals and a couple of somewhat sappy numbers aside, it’s hard to find any faults, though. Recording is excellent, capturing all the fire and fury with both clarity and presence, with little crowd noise to distract from proceedings. Instrumental contributions are all top-notch, and the set is well-paced for a live show, if a little over-the-top-energetic for casual listening – this is definitely a party platter.