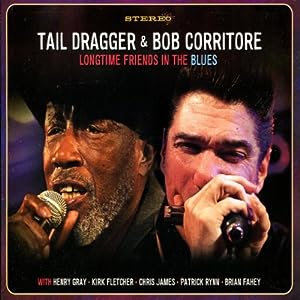 Vocalist Tail Dragger – more on that name a bit later - and harmonica ace Bob Corritore first met at a tribute to Howlin’ Wolf a day after the blues titan’s death back in 1976. They’ve been friends and occasional musical accomplices ever since, but this is their first outing as co-leaders of a band.

Legend has it Tail Dragger – real name James T. Jones – got his moniker from Wolf himself, who complained that Jones was always ‘dragging his tail in late.’ Earlier in his career he came across as a bit of a Wolf imitator, but he’s long since established his own identity – the raspy, growly voice is similar, and he can be just as menacing, but it’s his own personality that comes through loud and clear. He’s a larger-than-life persona, irascible and ornery but with a twinkle in his eye, his delivery brash and belligerent.

Corritore has worked tirelessly through the years and has emerged as one of the finest traditional style harmonica players around – tradition, in this case, as defined by the likes of Sonny Boy Williamson and Little Walter during the ‘golden years’ of Chicago blues. Whether it’s guttural growls or piercing high-end squeals, he’s endlessly expressive, and in true Chicago style his harp is an integral part of the instrumental tapestry rather than mere accent.

And what a band it is – guitarists Kirk Fletcher and Chris James, bassist Patrick Rynn, (as co-leaders themselves, Rynn and James have a pair of fine discs on Earwig Records), and drummer Brian Fahey. Also on hand is piano legend Henry Gray, a long-time Wolf accompanist himself. They’re all solid, seasoned pros who understand the essence of ensemble play, weaving their individual instrumental contributions into a seamless whole with seemingly intuitive ease.

With one exception – Sonny Boy Williamson’s oft-covered “Sugar Sweet” - the material is all credited to Jones, though all the originals are well within standard twelve-bar convention. All but one are classic hard-core shuffles and grinders, with the lone variation a piano-based boogie featuring veteran Grey’s still-sprightly keys and nice acoustic harp from Corritore.

In short, there are no real surprises – just no-nonsense, working class, drown-and-dance-your-troubles-away blues, with pile-driving rhythms, slashing guitars, sparkling piano and buzzing harp forming a formidable backdrop for Tail Dragger’s swaggering, commanding vocals. Like Wolf, he can be harsh and downright scary, but there’s a laconic side as well, and his phrasing is all his own – the trick to delivering classic material like this and keeping it fresh is to inject it all with personality, and despite the familiarity of the forms, there’s no doubt the songs are his.

The blues, by definition, are finite. There’s only so much one can do with a twelve-bar tune, and to a very large extent, much of it’s been done before. But the sheer, primal power and punch of a well-oiled blues band firing on all cylinders remains undiminished. It’s a lot trickier than it seems, and rarely is it done as well as this.