Americana by way of a hot, sweaty roadhouse

The term ‘Americana’ usually conjures up acoustic instruments – guitar, banjo, fiddle – and music that sounds as though it should be barefoot on the back porch. 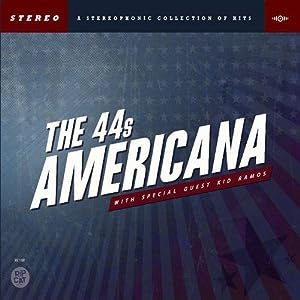 The 44’s have a different take on Americana – theirs is sweaty, roadhouse music, raucous and raunchy and meant to be played loud to cut through the haze and the noise. It’s tough and swaggering and dangerous, best served where there’s lots of both cold beer and room to dance.

The 44’s – guitarist and vocalist Johnny Main, drummer J. R. Lozano, bassist Mike Turturro, with Tex “The Weeping Willow” Nakamura on harmonica – are joined here by special guest Kid Ramos, who also had a hand in production, with Ron Dziubla contributing horns to a pair.

The sound is rootsy, alright, but the roots range from hard-driving boogies to swampy funk and bone-crunching Chicago blues, the sturdy building blocks that form the foundation of ‘electric’ Americana.

Apart from a bit of help from Ramos on a couple of compositions, all but two of the tunes are band originals. Material ranges from the hard-driving boogie of “Hangin’ Tree,” a menacing tale as spooky as its central image, to the countrified romp of “Dixie,” another tune that dwells on the edge of darkness. There’s the laconic, Jimmy-Reed-style “Cocaine”, complete with piercing, high-end harp, and “She’s Poison,” reminiscent of swamp classic “Strange Things Happening.” “Pleading My Case” is a direct nod to Elmore James, while “Hard Times” provides an acoustic interlude with some fine dobro from Ramos filling in the sound.

The rest of the originals are primarily shuffles and boogies, with covers including straight-ahead versions of Willie Dixon’s “You’ll Be Mine” and Howlin’ Wolf’s grinding “Mr Highway Man.”

Main’s singing and guitar work are top notch throughout, the rhythm section chugs along like a train, and the presence of guitarist extraordinaire Kid Ramos is always a good thing – as both accompanist and lead, he’s one of the most expressive guitarists around, and his production is spot-on – it sounds as though they’re playing live, with lots of raw distortion, and the harmonica fairly jumps out of the speakers. Nakamura is utterly on fire, his tone raw and raunchy and his playing inventive yet with an absolutely classic sound and approach.

It may not be startlingly original – nothing here is likely to alter the course of musical history – but it’s all gloriously greasy and righteously real. And as a celebration of distinctly American music – music as big and loud as the country itself, roaring to be heard above the din of progress and the sheer cacophony of life - it more than lives up to the ‘Americana’ tag. Great stuff …!