The Mannish Boys have become, over the course of six recordings now, a genuine blues powerhouse. A supergroup of sorts, they’ve always been a review-style band, with a rotating cast and more guests than one can shake a stick at. 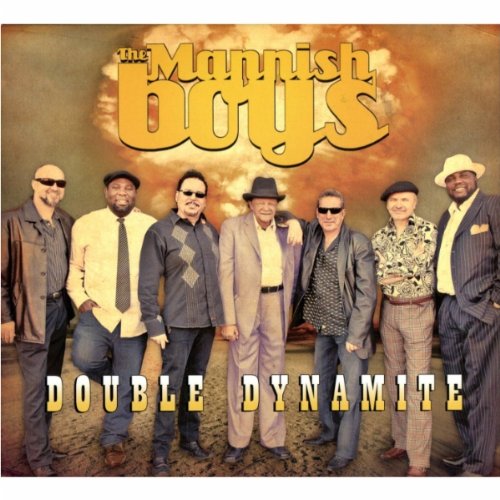 It helps that the guests are chosen from Delta Groove’s rather impressive roster; the Mannish Boys are led by label honcho and ace harmonica player Randy Chortkoff. The remainder of the core band includes mainstay Finis Tasby and newcomer Sugaray Rayford sharing vocals, with Chortkoff on harp, Kirk Fletcher and Frank Goldwasser on guitars, and the rock-solid core of drummer Jimi Bott and bassist Willie J. Campbell. There are so many players involved, though, that credits are song-by song and only Bott is a constant throughout.

This one’s a two-disc set, divided thematically; disc one is labeled Atomic Blues, while disc two is a Rhythm & Blues Explosion. There’s some crossover, but for the most part guests are employed for one or the other. The first being a harp-heavy collection, the list includes the likes of Rod Piazza, James Harman, and Bob Corritore, with Elvin Bishop on slide guitar and vocalists Jackie Payne and Mud Morganfield. Rob Rio appears most on piano, but in all there are a total of fourteen musicians listed. Disc two’s list is even longer – in all, some twenty-three participants in addition to the band, including guitarists Kid Ramos and Junior Watson, with return appearances from Bishop, Rio, Payne, and basist Bill Stuve.

The blues collection consists primarily of covers, though the playlist largely avoids the overdone, with compositions from, among others, Son House, two from Little Walter, Robert Nighthawk Sonny Boy Williamson, and a medley of Muddy’s “She’s Nineteen Years Old” and “Streamline Woman.” One can argue that the world really doesn’t need another version of “Mannish Boy,” but given the band’s name it’s about time they recorded it. And hey, who better to handle the vocal than Mud Morganfield, Muddy’s son, who does a thoroughly credible job. James Harman handles vocals and harp on his own “Bad Detective,” while Chortkoff contributes two solid twelve-bars, playing harmonica on both and handling vocals on the Jimmy-Reed style “You Dogged Me.” All in all it’s a solid, no-nonsense outing, impeccably played and with some seriously fine harmonica work.

The Rhythm & Blues Explosion disc offers a few more surprises. Starting off with Albert King’s “Born Under A Bad Sign,” the playlist includes three from James Brown (“You’ve Got The Power,” a duet between Rayford and Cynthia Manley, instrumental “Cold Sweat,” and the bluesy “Why Does Everything Happen To Me”). Indeed, the blues isn’t far away – also on the playlist are Ray Charles’ “Mr. Charles Blues” and James Cotton’s “West Helena Blues,” along with Jimmy McCracklin’s “Later On.” Harman returns to close the party with hs own characteristically quirky “Hittin’ The Groove.” With greater emphasis on guitar (Ramos and Watson are typically brilliant, and Elvin Bishop just rips his way through “Bad Sign”) and brassy horns, this one feels like the livelier of the two discs.

Given the generosity of the package – all those players, and twenty-six tracks all told – there are bound to be a few weaker moments. In this case, though, they’re noticeable only because of the strength of everything else. Neither Chortkoff’s laconic nor Goldwasser’s tortured vocals – they take a tune each - are high points, and there are moments when Tasby sounds tired and almost overwhelmed by the hard-edged arrangements. But those are truly minor points among a veritable treasure trove of highlights.

It’s traditional, yes, but participants all inject enough personality to keep it vital and alive. And it’s polished, not by studio wizardry but by the sheer wealth of talent and professionalism of some of the very best blues artists in the business. All in all it simply doesn’t get much better than this …!