There’s a reason why the classics endure …

Great art endures. There’s a reason people still listen to Beethoven and Bach, and time is proving that the classic sound of Chicago blues is a potent and lasting artistic force as well. 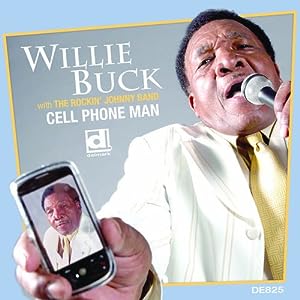 Willie Buck’s been cranking out unpretentious, meat-and-potatoes Chicago blues since arriving in the Windy City in ’53. To say he’s a Muddy Waters disciple is an understatement – Muddy’s songs have always formed much of his repertoire, and Buck’s originals borrow heavily. Many of his mannerisms are uncannily like Muddy’s, and while his voice isn’t quite as commanding, his phrasing is often remarkably similar.

But the sheer emotional power of the blues remains undiminished, and Buck and company do it all so well that, while there’s nothing particularly new or innovative here, it’s a welcome addition to any blues library.

Buck’s only previous outing, also on Delmark Records, collected tracks recorded here and there in the early eighties and was only released in 2010. Here he gets a proper session backed by Rockin’ Johnny and his band – rhythm guitarist Rick Kreher, bassist John Sefner, drummer Steve Bass, with Barrelhouse Chuck on keys. Harmonica duties are shared by Martin Lang and Bharath Rajakumar, both of whom are absolute masters of the Mississippi saxophone. (Canada’s Rajakumar – he’s from Ottawa – is particularly deserving of wider recognition). They’re all seasoned pros who know this stuff inside and out but play with undiminished ferocity, the rhythm section locking onto each groove and riding it relentlessly while the guitars, harmonica, and piano weave and entwine with sinuous grace.

Music this powerful, with such a visceral punch, requires equally authoritative vocals, and Buck’s more than up to the task. He knows it’s about presence and command, not frenetic pyrotechnics. He’s a potent and compelling force, delivering each line with confident dignity and a hint of dark menace.

Material includes fare familiar to any Muddy Waters fan - “Two Trains Running,” “Streamline Woman,” “My Eyes Keep Me In Trouble,” and “Blow Wind Blow” are all here – and Buck’s own compositions, again, lean heavily on either Waters’ or Willie Dixon compositions that form the backbone of the blues.

It all sounds gloriously like the golden years, the fifties, when giants like Muddy and Wolf forged a raw, muscular, no-nonsense sound as a primal response to the clash and clatter of city life. Not too pretty and definitely not over-polished, it sounds vital, necessary, as though the blues were an itch that simply can’t be scratched enough. Good stuff indeed!