A few Foster originals and an eclectic group of covers leads to a satisfying, soulful listen... 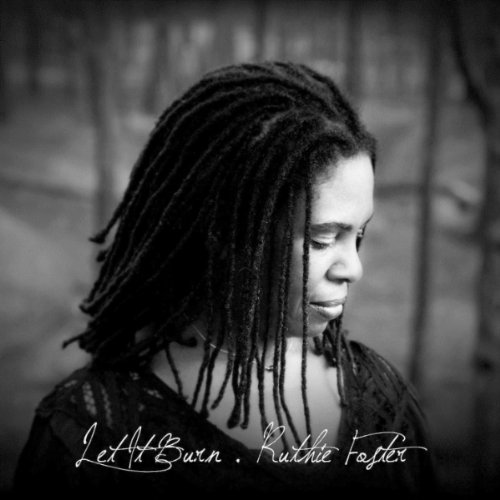 Ruthie Foster has won Blues Music Awards the past two years largely on the strength of her 2009 LP The Truth According To Ruthie Foster. A quick glance at the trackisting of her 2011 effort Let It Burn prepares us for an eclectic ride as we see a mix of originals and covers from artists ranging from Adele, The Black Keys, David Crosby, Pete Seeger, Robbie Robertson, and Johnny Cash's "Ring Of Fire." She is joined by special guests The Blind Boys of Alabama and William Bell, the Blind Boys contributing to Crosby's "Long Time Gone" and "The Titanic" while Bell joins her on "You Don't Miss Your Water," a song he wrote that is perhaps best known as one of the standouts on The Byrd's country-rock classic Sweetheart Of The Rodeo.

I imagine a lot of readers will be interested in her cover of the Adele co-penned hit "Set Fire To The Rain" and this is where I (once again) admit I'm one of the five holdouts where Adele is concerned so I can't compare the two versions for you but I can tell you Foster is convincing in this role. There is so much anger and pain in the lyrics but that's not where Foster takes her vocal. Bathed in washes of ghostly organ, she sounds like a woman who has experienced love's ups-and-downs, beginnings-and-endings a time or two in her life. The hurt is still real and fresh but there's a weariness in her interpretation, a "not this shit again" blues motif fills the air.

I'm a massive Black Keys fan and was surprised and eager to hear what Foster would do with "Everlasting Light," an absolute favorite of mine from the great Brothers LP. Longtime Keys listeners have marveled at the soulfulness of the Akron-born Dan Auerbach and Foster's great vocal performance makes me love and respect Auerbach more. Foster strips the modernist turns of the Keys' original and performs this something like they might have in their earlier days, although with more than a guitar--drum arrangement. Greasy slide guitar accents cuts across organ and the lyrics acend to a higher spiritual plane with Foster's soulful, gospel-inspired vocal.

"Ring Of Fire" is not only musically smaller but Foster's vocal interpretation gives us a new way to think about this classic. June Carter Cash penned the song and the imagery about the love's power and the burning fire of longing for another. She plays to the more plaintive side of longing, perhaps inhabiting the lonesome soul who isn't in the throes of lust or infatuation but is hurting, needing that connection with someone to fill the empty places that only love can touch.

Foster's "Aim For The Heart" and The Band's Robbie Robertson-penned "It Makes No Difference" is a great one-two punch in the middle of the album. The former simmers and grooves with some great slide work, urging us to have the courage to find love again and reminding us "aim for the heart and you'll never go wrong."

She follows that with the heartbreak of Robertson's "It Makes No Difference," the story of someone convinced the love of their life is gone and there is no heart left to aim for.

Foster relies on organist Ike Stubblefield throughout so it's interesting that the folk-spiritual "If I Had A Hammer" is the song she chooses to omit that sound. The arrangement takes on the dark air of a jazz superclub from the Mad Men era and she makes it work, selling it with her voice and because it is so different than the innumerable recordings of this standard.

If Let It Burn has any flaws, it's that Forster rarely raises or lowers the intensity of her vocal attack above or below a defined threshold, nor does she often vary the music in tempo or tone, leading to a sameness from track-to-track. That consistency helps the album feel cohesive but it detracts slightly from the chances she does take in reinterpreting the music of these other songwriters alongside her own originals. That small quibble aside, Foster succeeds and Let It Burn is a wonderful achievement and a pleasure.