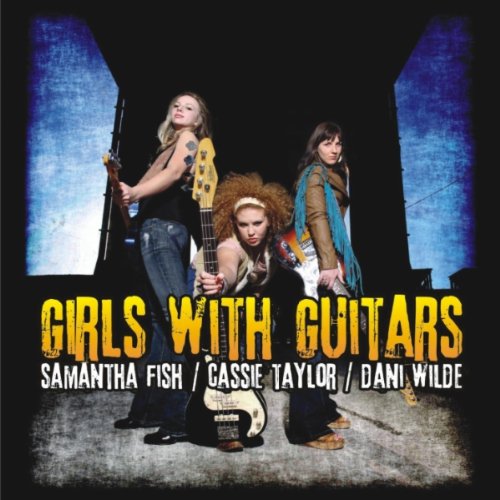 I hate falling for the obvious but three 20-something women on the front cover of an album and call it Girls With Guitars, it's clear marketing is on someone's mind.

So you try and put that behind you because Dani Wilde, Samantha Fish, and Cassie Taylor are all three talented artists and surely that will triumph over chicanery by TheMachine. The packaging is irrelevant; the music is what matters. The first track on the album is a cover of the Rolling Stones' "Bitch." It's a straightforward, uptempo arrangement of the song but once you get over the novelty of women singing the Stones' "Bitch," there's not much there.

It's a problem that plagues this set. There's not a lot of "there" there. Girls With Guitars needed a stronger guiding hand when it came to material and production. The songs are often riddled with clichés and the sound is slick and flat. I'm not one who listens to packages like this with a "blues slide rule" to determine if an album is sufficiently bluesy enough to get the label, but this set straddles the blues/blues-rock line, never committing. It doesn't rock hard enough when it sounds like it wants to ("We Ain't Gonna Get Out Of Here Alive") and isn't faithful enough to the idiom for even a contemporary blues label.

The criticism sounds unduly harsh because this is far from terrible, but the flaws in construction mar the execution. "Move On" works well. "Satisfy My Soul" and "My Loving Man" are generic but harmless and each has moments where you can hear what they were going for. "We Ain't Gonne Get Out Of Here Alive" has meat, grit, and racket but it isn't allowed to ignite. "Are You Ready" flirts with a bit of country in the blues-rock construction and comes off well, save for the overwrought vocal. The lone dud on the set is the plodding, pointless cover of Steve Miller Band's "Jet Airliner."

Girls With Guitars disappoints, mostly because there is talent enough here that it could have been special and it's just not.