Things get a little too complicated on S'Aida's latest. 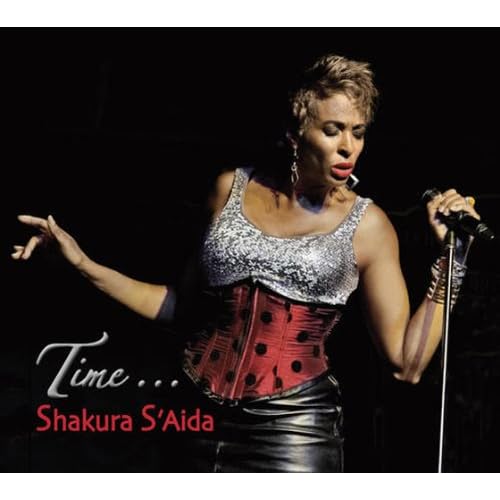 It’s a bit of throwback, in this era of digital downloads (and rather short attention spans), to release a two-cd set showcasing an artist’s broad array of interests and influences. Brooklyn-born, raised in Switzerland, and now based in Toronto, Shakura S’Aida takes just that brave step with Time …, a thematic collection with the first disc subtitled Time To Rock My Soul, and the second labeled Time For The Blues …

S’Aida is blessed with exceptionally powerful pipes and a charismatic presence. She’s worked in World music, is an accomplished actor, and has, for the last few years, appeared at festivals and shows throughout Canada and Europe.

That experience is in ample evidence here – there’s a ‘showbiz’ quality to the project, a sense that the tunes are written and / or arranged for big stages and big crowds. And while S’Aida knows all the tricks designed to wring emotion and touch the heartstrings, in the end it all comes across as theatrical rather than heartfelt.

There are certainly no problems with performances or production. The band is big, led by S’Aida’s musical foil, Donna Grantis, and featuring a rotating cast off experienced players. But while there are solos to be found, again the sense is of carefully arranged compositions rather than spontaneous expressions of musical inspiration. But if those are your expectations going in – if it’s the polished show rather than improvised interplay that turns your crank, this is a fine collection.

S’Aida kicks off disc one with a gender-adjusted cover of the Long John Baldry classic, “Don’t You Lay No Boogie Woogie On The [Queen] Of Rock ‘N' Soul,” transforming what was essentially a clever but simple ditty into something significantly more complex. The majority of the tunes on the Rock My Soul disc, though, are originals, all but one co-written by S’Aida and guitarist Grantis. They’re solidly constructed and impeccably performed, but in truth lack the kind of hooks to be truly memorable, and seem just a little too polished, a bit too carefully assembled, to really make a lasting impact. There’s lots of bombast, with the exception of the quietly affecting “Between Us,” with just gentle acoustic guitar and cello accompaniment – but even there, S’Aida and co-writer Grantis can’t help reaching for the rafters, forgoing quiet intimacy for the sake of a larger statement.

One can argue that the rock songs benefit from the craft and attention to detail, but it becomes a bit more problematic on the Time For The Blues disc. Again primarily original – covers include Anders Osborne’s “Ya Ya” (not the Lee Dorsey classic) and a relatively obscure Billie Holiday tune (“Tell Me More, More, And Then Some”) – it all seems a bit too obvious, selections chosen and / or written to cover the requisite stylistic bases and hit the emotional soft spots.

Again, the performances are top notch, but the unavoidable impression is that these are festival songs – one can almost see S’Aida strutting the stage, working the crowd into a frenzy, hitting all the right notes. There’s nothing wrong with that, of course – S’Aida’s known as a genuine crowd-pleaser, able to hold an audience in the palm of her hand, and she’s a formidable vocal presence. Here, though, the overall effect seems a bit too calculated, the artifice too close to the surface.

Take, for example, S’Aida’s own “Geechee Woman.” An extended harmonica-and-scat intro, throbbing bass, and a full background chorus on the outro all work, musically speaking. But as a blues tune, it seems crafted to order rather than an expression of genuine emotion. The same can be said for most of the tunes on the second disc – lots of production wizardry, lots of subtle background vocals, layers of brass and intricate percussion result in excellent music – but it’s music as entertainment, sophisticated, very professional, but simply too glossy to really believe in. Even her passionate delivery of the Holiday tune – with just acoustic guitar accompaniment and a touch of brushes – seems overly deliberate. And the collection’s closer, a playful duet with label mate Harrison Kennedy, is delightful, but there’s no doubt the interplay between the two is carefully scripted rather than spontaneously expressive.

There’s certainly a place for music like this. Impeccably crafted and expertly produced, with a big sound – and S’Aida’s big, powerful voice – it’s the kind of music that would no doubt dazzle a live audience. Yet while there’s absolutely nothing wrong with Time …, no missteps or lapses of taste - somehow, on disc, it sounds as though it’s all just waiting to be played out on a big stage.