An excellent marriage of prog rock legends and the music of Supertramp...

There is something about tribute albums that always sends me back to the bands in question. With the new Cleopatra tribute to Supertramp, Songs of the Century, it was no different But I must say that this collection is certainly an impressive one. For one thing, it is hard to beat the all-star progressive rock lineup. A partial list of participants includes John Wetton; Tony Levin; Rick Wakeman; Robby Krieger; Colin Moulding; Steve Morse; Chris Squire; Peter Banks; and Rod Argent, and many, many more. 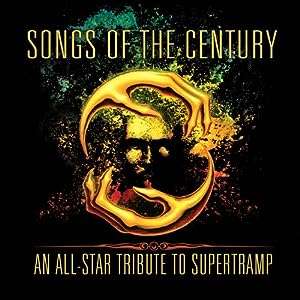 The funny thing is, I never really considered Supertramp to be a prog group. There may have been some tendencies, but for the most part, they were a really good rock band. Their two big albums were Crime of the Century and Breakfast in America. If one of the hallmarks of prog songs was “the longer the better” than Supertramp fell woefully short of the mark. The longest track on either of those albums is “Rudy” at 7:17. To be fair, there was “Fools Overture” (10:52) from Even in the Quietest Moments, but it is not included in the set.

Songs of the Century is not about lengthy prog tracks though. It is a celebration of their hits, and actually only features songs from three albums. These are Crime of the Century, Even in the Quietest Moments, and Breakfast in America. To break it down, the songs from Crime are “Crime of the Century;” “Dreamer,” “Rudy,” “Bloody Well Right,” and “School.”  From Even in the Quietest Moments, we get “Give A Little Bit,” and “If Everyone Was Listening.” From Breakfast in America, the songs are "Breakfast in America," “Take the Long Way Home,” “The Logical Song,” and “Goodbye Stranger.” The final "bonus" track is “Let the World Revolve,” written by Billy Sherwood, in something of a Supertramp vein.

Befitting such a project, each ‘Tramp song is sung by a different vocalist. I was particularly impressed by Colin Moulding’s (of XTC) singing on “It’s Raining Again,” and Rod Argent’s take on “School.” The song “School” is the first Supertramp song I heard, way back in 1974, and it remains a classic. It closes out the 11 ‘Tramp songs, and also features Robby Krieger on guitar.

Opening up the set is a fine version of “Breakfast in America,” sung by the redoubtable John Wetton. It also features an excellent keyboard solo from Larry Fast. “Rudy” may well be my all time favorite Supertramp song, and a true progressive legend handles the vocals on it here, Roye Albrighton of Nektar. “Crime of the Century” gets my nod as the best  “cover” version, with Rick Wakeman handling the piano and Moog duties, plus Tony Levin on bass.

It would have been hilarious if the people at Cleopatra had reproduced the worst album cover art of any I have ever seen in the entire history of rock and roll. That would be the cover of their Crisis, What Crisis? If you don’t believe me, check it out for yourself. That cover has got to be the ultimate “What were they thinking?” moment, which is a question every progressive rock fan has to ask about their favorite band at least once. So in the end, maybe Supertramp were the ultimate prog band - I guess it all depends on your definition.

In any event, for fans of Supertramp, and for an opportunity to hear a true galaxy of prog-rock stars playing together, Songs of the Century is highly recommended.