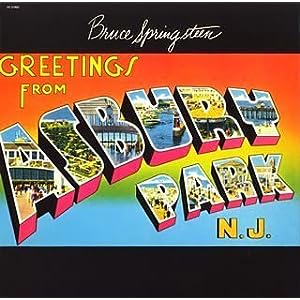 Bruce Springsteen released his debut album Greetings From Asbury Park, NJ on this day in 1973.  Thirty-eight years later, I think we can say the Springsteen kid might turn out all right.

It's amazing listening to Greetings now and hearing the aspects of Springsteen's musical personality that were evident from the beginning as well as those that disappeared.  The drama and cinematic scope of "Lost In The Flood" would become an integral part of Born To Run and would have fit beautifully.   I don't know if I can as easily place "Spirit In The Night" on a later album but it has aged as well as any of the other songs from Greetings.

As for my own experiences with the album, I've seen Springsteen & The E Street Band six times and have heard four from Greetings.  I got "Blinded By The Light" at my very first show in Atlanta and a solo piano performance of "For You" in St. Louis (the others are "Spirit In The Night" and "Growin' Up").  Of those I've yet to hear, "Lost in the Flood" is tops on my list with "It's Hard To Be A Saint In The City" coming in closely behind.

Let's all wish Greetings a Happy 38th birthday.  Do you have any special memories associated with the songs from this album?  Which songs have you heard from it in concert?  Prefer Manfred Mann's version of "Blinded By The Light?"  What about Bowie's "It's Hard To Be A Saint In The City?"  Let's discuss…