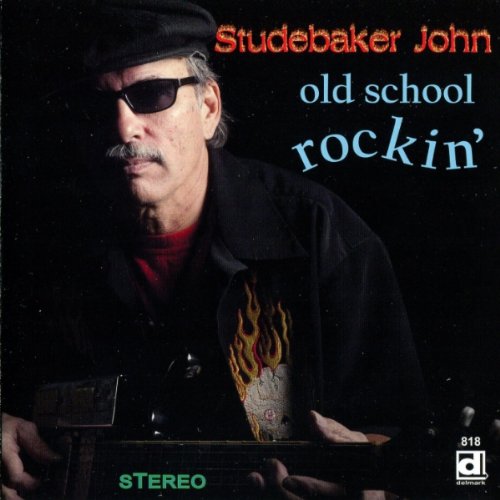 If such an award existed, Studebaker John would hands down take the trophy for most accurately named recording:  Old School Rockin’ is just that, a raw and raucous celebration brimming with almost-uncontrollable energy from beginning to end.

John’s last project, 2010’s Maxwell Street Kings, found him exploring the sounds and styles the prevailed in Chicago’s famed Maxwell Street Market, a pitch-perfect period piece that captured the rollicking sounds of street corner bands fighting for space. Old School Rockin’ is a natural extension, concentrating on the frenetic attack of music struggling to be heard above – make that conquer - the omnipresent noise of everyday life.

John (real name John Grimaldi) wrote all the material here, fourteen tracks of blistering, no-holds-barred roadhouse rockin’ blues. This is music designed not so much to drown one’s sorrows out, but to bludgeon them into bloody submission. From the furious slide guitar the kicks off “Rockin’ The Boogie” to the thick-toned harp that takes ”Tumblin’ Down The Highway” out, this is a rough-and-ragged tribute to the music Grimaldi grew up with.

Basically a trio outing, guest Doug Organ contributes  - what else – organ to a track, but otherwise it’s just Grimaldi’s slashing guitars and piercing harmonica, with supple, in-the-pocket support from bassist Bob Halaj and drummer Albert ‘Joey’ Dimarco. But while the overall sound may be loose and raunchy, there’s no shortage of musical meat to chew on here. Grimaldi is a slide virtuoso, working wonders with the relatively limited tonal palette of the slide guitar, and there’s lots of overdubbing for additional muscle - rhythm, lead, and slide guitars are expertly intertwined throughout. He’s also a monster on the Mississippi saxophone, with a squalling tone and dazzling technique - his blistering outro on “Fire Down Below” is absolutely breathtaking. Vocally, he sounds a lot like John Hiatt at his growly best, though the vocals are generally low in the mix and not the collection’s most prominent feature.

Compositions tend to be workmanlike, with the emphasis on the rocking side of things – while there’s a bluesy swagger to every tune, there aren’t really any twelve-bar grinders, and the bass and drums tend to be a lot busier than a typical blues outfit. Variety comes primarily through tempo and beat – there is a certain sameness after a while, and most tracks exceed the five-minute mark. The only significant surprise is “Mesmerized,” a tune that sounds like an early influence on Santana.

All in all, though, this is a stellar outing, rough and tough, lean and mean, and pretty much guaranteed to move the feet and make one forget day-to-day troubles. Just make sure you have plenty of beer on hand – this is sweaty, to-hell-with-tomorrow music, and as such about as good as it gets.