A grooving, killer soundtrack to the 2012 DVD release... 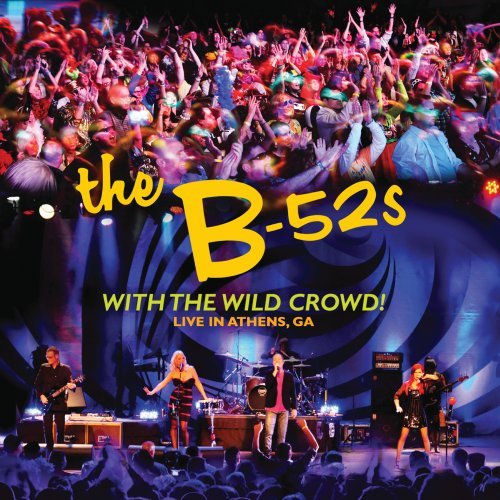 For the first time in their three decades together, the B-52s have released a live album, and With The Wild Crowd! – Live In Athens, GA is a party I’m sorry I wasn’t invited to. To commemorate their 34th anniversary, the B-52s performed a Valentine’s Day show for their most rabid fans who came resplendent in glitter, boas, and sunglasses. Hold on to that image for a moment, won’t you? And don’t worry; you won’t need your imagination for much longer as a DVD version of the show will be available in 2012.

The B-52s formed in Athens, Georgia in 1976 with founding members Cindy Wilson, her brother Ricky (who died of AIDS/HIV complications in 1985, leaving them a foursome), Kate Pierson, Fred Schneider and Keith Strickland. The story is they played their first impromptu gig after sharing a Flaming Volcano (alcoholic beverage, meant to be shared, approximately 32 ounces), and later had their first live “official” show on Valentine’s Day 1977 for their friends. It surprised me more than a little bit that a band that is this funky fresh and known as the ultimate “party band” has never released a live album. But, let’s not dwell on that because it’s here and it’s FAB-U-LOUS!

Wild Crowd gives us a little bit of everything from the call and response play between Schneider and the two ladies on “Love Shack” and “Private Idaho” to the perfect, weirdness of "Wig" and the cosmic effects on "Planet Claire." The band sounds just as crazy, energized, and in love with each other as ever. Pierson and Wilson still sound like they’re in their twenties and I don’t think Schneider will ever switch to decaf or take it down a notch. There’s not one bit of this album I didn’t love! It’s exactly what I want in a live album: crowd interaction, short asides, and banter with the crowd and each other, and above and beyond all I want energy and strong vocals.

With The Wild Crowd! opens with “Pump” off their 2008 album Funplex. “Private Idaho” (the inspiration for Gus Van Sant’s movie My Own Private Idaho) sounds as good as it possibly can and the David Byrne-produced “Mesopotamia” is a treat that leads us right into “Ultraviolet” and the campy, engaging, playfulness never slows down.

My favorite part of the entire album is the weird and silly “Love In The Year 3000” with lyrics like: “I could give you a kiss/Tentative tentacles are grabbing me/We're making space love in zero gravity” following a chant of “Robots, bootybots, erotobots!" How could you not absolutely love this band? They introduced us to RuPaul in the video for their megahit “Love Shack” and reportedly gave John Lennon his groove back after having heard their underground classic “Rock Lobster.”

With The Wild Crowd! produced such a strong, visceral reaction in me, I can only imagine what effect the DVD will have when I get to see the disco strobe party for myself.