Brassy and bold and highly opinionated – Treasa Levasseur is a broad in all the good ways …! 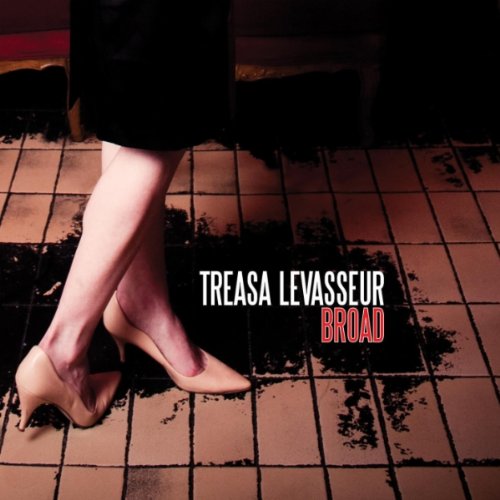 Toronto’s Treasa Levasseur is no shrinking violet; brazenly calling her latest recording Broad, she exhibits a fiercely independent and ferocious intelligence that refuses to back down from controversial subject material.   Whether examining personal relationships or the sharp divides that tear families and society apart, she’s unflinchingly honest and emotionally indomitable.  And yet she does it all with a voice that, while capable of gritty resolve, can best be described by the overworked cliché “smooth as velvet.”

Levasseur wrote nine of Broad’s twelve tracks, with covers including Neil Young’s “Walk On” and Randy Newman’s acerbic “God’s Song” (provocative even by Newman’s standards).  Two themes emerge throughout the disc - a restless need to keep moving, and – surprising in this day and age of fuzzy protests without focus – the need for a strong, self-reliant work ethic.

And she wraps it all in a superbly played and produced package featuring four different backing bands, all stellar outfits in their own right.   They include up-and-comers MonkeyJunk,  Raoul And The Big Time, The Daily Special, and the Wroxton Allstars.  None are widely known, but they’re all accomplished outfits comprised of seasoned and soulful veterans.  It’s worth noting that three of the four feature harmonica players, with Steve Marriner, Raoul Baneja, and Paul Reddick all contributing masterful licks on the lickin’ stick.  Elsewhere the mood is set with Levasseur’s own unobtrusive piano and excellent accordion.

But while the accompaniment is uniformly excellent, this is a songwriter’s project, and Levasseur has lots to say – lyrically she’s sassy and sexy and absolutely fearless – so solos are minimal and invariably to-the-point, keeping each song concise and tightly focused.  And while she’s embraced by the blues community, there’s really nothing here that could be called blues – the sound is rootsy and the instrumentation organic, but Levasseurs’s compositions are far more melodic and catchy than formulaic  twelve-bar convention.

Fare includes that thought-provoking “A Little Pride,” addressing the issue of a woman’s right to dress as she pleases, and “What We’re Worth,” propagating the unfashionable notion that “What we do is what we are worth.”  “Davey” is a sweet song of succor and solace, while “We Should Dance” is an unapologetic celebration of the here-and-now.  And “Let Me Sleep On It,” the collection’s closer, is simply stunning – an autobiographical tale of self-reliant defiance in the face of discouragement, and the value and worth of pursuing one’s dreams.

But no matter what song she’s singing, Levasseur’s voice remains an utterly remarkable and absolutely captivating instrument.   It’s a pure and natural marvel, strong and clear but somehow soft, too, with a velvety warmth that seems to teeter on the edge of unrestrained mirth.   Beguiling and bewitching, her voice alone could easily carry weaker material – but the truth is, she’s just as accomplished at writing and arranging as she is as a vocalist, and there’s really not a weak moment to be found here.

One suspects Treasa Levasseur delights in being called a ‘broad,’ the word implying a brash personality with opinions aplenty and an unshakeable confidence.  She deserves it – in every good way possible.  She’s a remarkable talent, and Broad is a true gem.  Highly recommended!