Believe it or not, the banjo is actually cool! 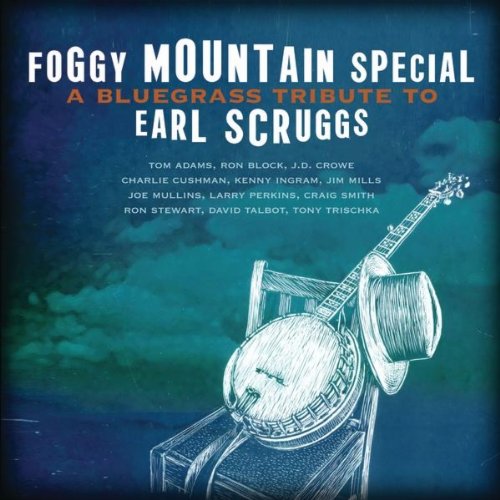 It’s an absolute no-brainer, reaally.  Take the single most influential banjo player of all time, recently passed (Scruggs died in 2012 at the age of 88), gather the cream of a new generation, backed by an absolutely impeccable cast of supporting musicians … what could possibly go wrong?

True, some would shrink in horror at the thought of a whole album’s worth of banjo-based instrumentals. It's not the most versatile instrument around – the banjo's tone doesn’t vary much, and the strings can’t be bent to add shading and nuance the way a guitar’s can.  All too often, the only measure of a player’s prowess is how fast he or she can play.  But this collection – an all-start outing of tunes either written or made popular by Scruggs – shows just how broad the banjo’s range can be.

The brainchild of producer Tim Austin, it was his idea to get the best of today’s banjo players to pay tribute to Scruggs – the man who introduced the three-finger plucking method that’s become more or less the norm today (as opposed to the ‘clawhammer’ style).  He gained his greatest fame, though, along with then-partner Lester Flatt, with the theme to television’s “Beverly Hillbillies.”

It took a number of years to pull it all together – there were three different sessions, with recordings in 2006 and 2008 – but the results are simply stunning.  Banjo players don’t get a lot of press, so most names here won’t be familiar to many outside the world of bluegrass; on hand are the likes of Ron Block and Ron Stewart (who also contributes fiddle on most other tracks), Tony Triscka and J.D. Crowe, perhaps the best-known of the bunch.  Backing comes courtesy of a who’s who of contemporary bluegrass, with breathtaking instrumental execution the order of the day.  The band varies a bit from session to session, but the tunes seem part of the collective consciousness, for the most part standards, with five of the dozen tracks either penned by or arranged (in the case of traditional “Sally Goodin”) by Scruggs himself.  All the tracks but one (Leon McAuliffe’s “Steel Guitar Rag”) were originally recorded by Scruggs between 1949 and 1969, the years in which Earl’s greatest  innovations occurred and his influence – if not outright  dominance - were at their peak.  (Scruggs did play “Steel Guitar Rag,” and here Tony Trischka bases his version on a live show Scruggs gave in the mid-fifties).

Again, a dozen banjo instrumentals might seem, at first, a bit much.  But the tunes are all well selected and carefully sequenced for variety, and while the instrumental palette is pretty much fixed – as a genre, bluegrass tends to be rather rigidly defined – they’re all strongly melodic, and as a result each stands out rather than blurring into a undifferentiated whole.  The banjo is front and center, of course, but the guitars, mandolin, and fiddle all get adequate solo space, too.   And the playing is simply sublime, blazingly fast yet precisely articulated, with the various instruments weaving an intricate yet exuberant tapestry in support of the banjo.

Earl Scruggs was a significant figure in the development of a distinct and enduring musical genre, and his innovations continue to resonate throughout bluegrass and Americana.  Acoustic musicians and musical scholars will find this a virtual history lesson and a demonstration of sheer musicality its expressive finest.  More causal listeners will simply enjoy a superb collection of warm and wonderful music played by masters.  A fine and fitting tribute to one of the greats …!