A loving and lovely tribute to a seminal bluesman 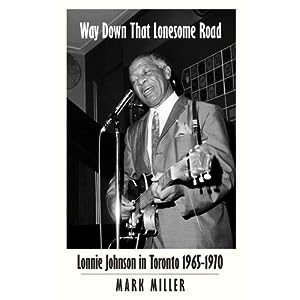 Lonnie Johnson was a formidably influential musician in his day. A fluid and accomplished guitarist, he straddled the worlds of blues and jazz, recording with both Louis Armstrong and Duke Ellington, and is cited as a formative influence by no less than B. B. King. A quiet and unassuming man, he was more than willing to perform whatever his audience preferred, including whatever was popular at the time. But he was arguably at his best as a bluesman, and most of his recorded legacy remains filed under blues.

Mark Miller, the dean of Canadian jazz journalists, has crafted a loving tribute to Johnson, focusing on his final years in Toronto. A veritable wisp of a book at only 130 pages, Miller concentrates on the heart of the man and his music, forgoing the endless minutiae that bogs down so many musical biographies (As Miller states early on, regarding Johnson’s own often-contradictory accounts, “Some of his assertions seem safe enough, their accuracy in any case of no great importance one way or another.”).

Like any musician of his era, Johnson’s life was a tale of travel punctuated by stopovers here and there. He arrived in Toronto in May of 1965 for a brief engagement, returning in June for a longer stay. Apart from brief forays, he rarely left his adopted home in the remaining five years of his life. In 1969, he was seriously injured in an auto accident (pinned against the wall of the restaurant where he’d just finished breakfast) and never fully recovered. He died alone in his rented room, but his wasn’t the typical tale of neglect. He still had money, still had many friends, and remained a respected artist – unable to play guitar after the accident, he nonetheless gave a triumphant performance at Toronto’s venerable Massey Hall, with Buddy Guy as accompanist, a few months before his death.

Favoring short, anecdotal chapters, Miller nonetheless manages to paint a vivid picture of time and place - Toronto and society in general in a period of great upheaval and profound change. Johnson spent most of his time in or near Yorkville, ground zero for Toronto’s Hippie scene, and Miller provides enough historical and sociological detail to put his story into perspective –a revered master to the folkies, gradually being left behind as rock ‘n’ roll and psychedelia began to dominate the prevailing musical landscape, rendering work increasingly hard to come by.

But it’s not the dates and details that make this such a fascinating read. Miller‘s more concerned with Johnson as a man than as an icon, and he captures Johnson’s humble warmth and humor with genuine affection. He points out various inconsistencies and improbabilities in the various stories by and about Johnson, but does so with a friendly shrug rather than a zealous quest to set the record straight - always a bit of a rascal with an eye for the ladies, Johnson wasn’t averse to stretching the truth if it made for a good tale. And Miller understands that sometimes it’s the stories, and not the facts, that paint the clearest picture of a life lived. Miller is both sympathetic and affectionate in his portrayal of a humble and genuinely likeable man who considered himself fortunate to make his living as a musician.

The true test of a biography is whether or not it captures the spirit of its subject. Johnson made friends easily, had a way with women (and by all accounts enjoyed the company of more than a few), and lived life on his own terms, leaving behind a recorded legacy that varies in quality but can still send shivers down the spine. Miller succeeds not just in bringing Johnson’s life into focus, but in bringing Johnson himself to life, in the process answering the plaintive plea of Johnson’s earliest recorded work … “Remember me after all the days I’m gone …”

Thanks to Miller, Johnson need not fear.