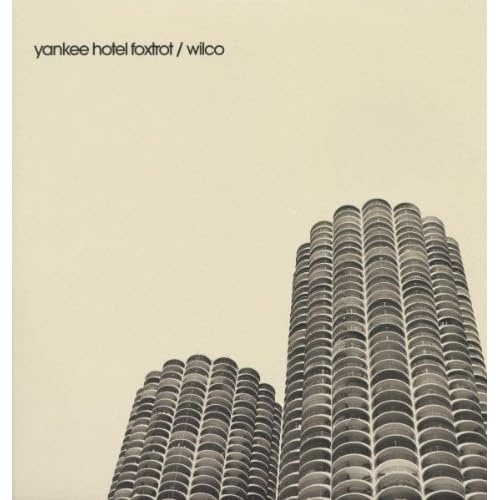 This week at Blinded By Sound we are celebrating the 10 year anniversary of Wilco's fearless Yankee Hotel Foxtrot. Well, 10 years since the record's official release date of April 23, 2002 - though most fans had the album in their hands well in advance of that date due to the strange political label happenings that surrounded the record's release.

I'd love to be cool enough to say that YHF had me at hello, but the truth is the sonic noise of the record, unlike anything I'd ever really heard before, took time for me to connect with. The record was cluttered, chattering, at times almost turbulent. There was just so much going on - the A.D.D listener in me wasn't sure where to focus. But as I listened more and more, the noise - coupled with signature Tweedy lyrics oozing in honest and vulnerability, melted together to form a set of songs that have been burned into my brain for the last decade.

And the story of YHF is as epic as the record itself. Captured in the documentary I Am Trying to Break Your Heart, we see Wilco released from the Reprise label in the aftermath of the AOL/TimeWarner merger of 2001. This parting of company left Wilco with a completed record that they owned the rights to - and a hunt for a new label. When all was said and done, the band signed with AOL/TimeWarner affiliate Nonesuch and released YHF, which received huge critical acclaim and was given a perfect score of 10 by Pitchfork Media. That about sums up the state of record labels at the time - Wilco created the record using AOL/TW dollars and then sold it back to AOL/TW. Brilliant.

The YHF story is a heroic one: David-esque band battles Goliath-esque record label and wins. The story is a dramatic one: The record was Wilco's last with Jay Bennett, who later sued Tweedy for breach of contract. The story is foreshadowing: Wilco went on to leave record labels all together to start their own label dBpm.

But it's the 11 beautifully busy tracks of the record that are really worth celebrating. Songs as relevant and forward-sounding today as they were ten years ago. With loud and boisterous tracks like "Heavy Metal Drummer" contrasting raw, sweet tracks like "Reservations" - YHF is an incredible soundtrack to an unbelievable story.

10 years later, there are no reservations to be had about Wilco. Pull this one off the shelf and give it a listen, friends - and celebrate the story of Yankee Hotel Foxtrot.