The magic happens on Dexys first new album in 27 years... 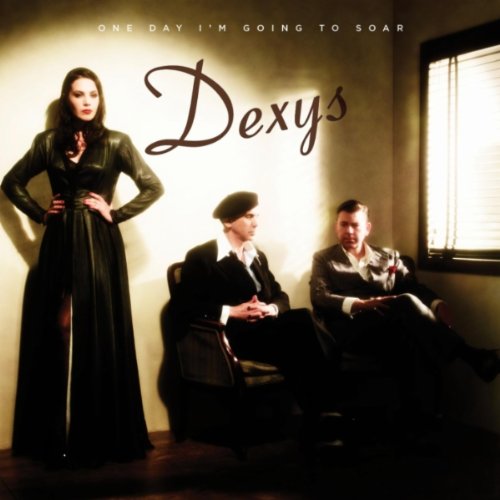 There used to be a tiny record shop about half a pint’s walk from the Clyde Tavern in Coleraine, Co. Londonderry, just across the road from the railway station, not far at all from the place where you used to be able to buy snake-in-a-bap, if a certain Andy Mooney was to believed (and he was not). For a period of about four or five months shortly after I turned eighteen I’d be stood in that record shop every other Thursday, one arm held out afore me with a fistful of Jobseekers Allowance burning at the end, the other hand gripping a plastic bag holding a Discman, a dozen AA batteries and a couple of A5 notebooks, and the chat that would be coming out of me would be something like “This is what I’m after this day,” and then reeling off the names of whatever Classic Albums I’d decided it was time I’d spent an evening slabbering over my chin to.

For the thing about the shop (and the reason it had to shut down within six wanks of opening) was that it specialised in budget CD reissues of the sorts of things the owner would want to listen to himself, and being a man that was never far from a Mojo feature on the recording of What’s Going On? or Imperial Bedroom, that meant lots of Leonard Cohen, The Beach Boys, The Humblebums, Fairport Convention, Public Enemy (but only the first couple), and very little in the way of, say, Eamon (or, indeed, Frankee).

Back and forth the whole of the day from there to the Clyde Tavern, till I’d drank myself skint for another fortnight and had to borrow the price of the train journey home, and the headphones in, and the face flush with the giddies. So many of my favourite records of all ever I picked up from that shop over those few months, and listened to in a nook on the far side of the bar in that tavern. Springsteen’s Nebraska and Darkness On The Edge Of Town; Derek and Clive Come Again; the first and last Smiths albums; most everything Bob Dylan put out between Bringing It All Back Home (although the version I bought there was titled Subterranean Homesick Blues) and Time out of Mind; Don’t Try This At Home by Billy Bragg (that on cassette without any cover); and Too-Rye-Ay, the second album by Birmingham’s Dexys Midnight Runners.

Too-Rye-Ay was the first Dexys album I bought, and it’s still my favourite, as incredible as Searching for the Young Soul Rebels and Don’t Stand Me Down may be. It’s also the one that gets talked about least, probably because it has That Song on, and also because the Too-Rye-Ay period was the one during which the band looked most ridiculous, with the dungarees and the straw and the pig-trotters in the pockets and the what the black fuck not else.

“Looks like a fucking hedge’s arse, though, doesn’t he?”

Because it’s well known that band-leader Kevin Rowland was nothing if not a restless bugger when it came to matters of the style and the vision and other words for “style” and “vision.” Three records Dexys made afore disbanding, and the folk pictured on the inlays of each bore no more resemblance to other than the fella on the cover of Get Rich or Die Tryin’ does to Ken of By Request Only fame: from the scowling, black-clad, beanie-hatted bastards that stomped and tooted and howled their way through that incredible debut, to those flailing fannies on the second, to the aloof, Ivy League tight-chops that recorded the hugely ambitious once-savaged, now-canonised Don’t Stand Me Down. Not forgetting the Projected Passion Revue iteration between the first and second albums, which involved the lot of them dressing up like boxers out for an early morning jog through a Midlands town centre.

The sound, too, differed massively between records, though always building on what had gone before, retaining what was important.

“Haven’t been about for years, but, have they?”

No, for what happened in the end was that the causal fans who had come to the band via Too-Rye-Ay and “Come On Eileen” had little patience for the epic, and not always especially “catchy,” meditations on identity, memory, Irish republicanism, and Kevin Rowland’s inability to sustain any meaningful relationship with anyone that wasn’t Kevin Rowland, which made up the third album, and the whole thing was derided as a gargantuan folly. Dexys split up not longer after its release, and Kevin Rowland went off to get addicted to a bunch of Class-A’s (“Hi there’s nothin’ class about them,” barman says) have a very public breakdown, record a quite beautiful solo record, and annoy the fuck out of Bruce Springsteen by changing a few of the lyrics to “Thunder Road” prior to recording it for the poorly-received (to say the least) but sorely underrated covers album My Beauty. (Springsteen demanded it be taken off the album, although it has recently surfaced on YouTube.) There was a reunion tour back in the first half of the 2000s (one of the best gigs I’ve ever been to, boys, them Dexys at the Waterfront Hall in Belfast, 2004...) and a couple excellent tracks recorded for a Greatest Hits record, but nothing substantial beyond that, and no real reason to assume, given the temperaments of all involved, that there ever would be.

Then, from nowhere, it is announced that a re-jigged “Dexys” have been hanging around in rooms equipped with microphones, big rolls of carpet, things with buttons marked REC on, and all with the intention of seeing what would happen if they maybe played a few new songs that they had been stringing together. The result is One Day I’m Going To Soar.

One Day I’m Going to Soar is the first Dexys album in 27 years, and also the first to sound entirely like the work of the band that made the previous one (even though it isn’t, really), which lends a nice irony to the slight name-change (no more Midnight Running. Too hot for it this time of year, anyway). Too-Rye-Ay and Don’t Stand Me Down could have feasibly been produced by two completely different groups. One Day I’m Going To Soar largely sounds like what resulted when Don’t Stand Me Down nipped out for a pish back in the day, leaving the constituent parts to amuse themselves for a bit.

To that end: lots and lots and lots of introspection, self-disgust, and self-obsession from Kevin Rowland. Lots of melancholy, slow-waltz balladering offset by lashings of knowingly OTT melodramatic theatrics. Lots of talk of being of Irish stock, and what does that even mean, and “take your Irish stereotypes / and shove them up your arse.” Lots of back-and-forth dialogue, mostly with newcomer Madeleine Hyland. A bit of a monologue, sort of, here and there.

It’s also largely stunning. The hooks sink in faster, if not necessarily deeper, than they did during those first few listens to Don’t Stand Me Down, least as far as I’m concerned. And for all its bitterness and sadness, it’s a frequently, intoxicatingly, rousing affair.

The stand-out tracks (the likes of “Now,” which begins as a mournful Irish piano ballad before a whole bunch of stomping R&B crashes upon the keys, and as such sets the tone for the album; “Lost”; “Nowhere is Home”; “Free”; “She’s Got A Wiggle”) are immediately arresting: sometimes, admittedly, on account of the force of the wince conjured by the rawness of the emotions on display (particularly where reactions to Kevin’s solo career are concerned: several references to being a “Wanderer,” to the reaction to My Beauty, to the fact that folk rejoice in “taking the piss out of me”), but more often for reasons of how tight and tuneful and impassioned the whole thing sounds. Less striking are the more meandering passages in the middle, but even then (with the exception of 75% of I’m Thinking of You, which I could have done without), a few listens bid many pleasures hitherto-blunted wriggle free of the murk.

I can’t imagine anyone who ever thought fondly of Dexys feeling any way disappointed by this. Fans of Don’t Stand Me Down, in particular, will be sold from the off. Certainly, if I were back in that Clyde Tavern, listening to this on the headphones over too-many-pints-too-quickly of a Thursday afternoon, I’d be grinning the grins of ninety men. As it is, I’m listening to it of a Wednesday morning in London a decade later. There’s not a hundred and ninety men in the country could hold these grins that I’m grinning now.