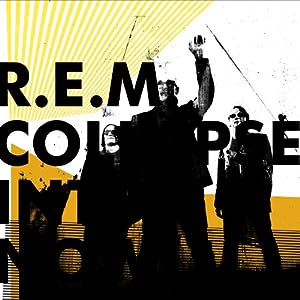 Today is R.E.M. frontman Michael Stipe's 51st birthday and in honor of the occasion, I'm previewing two tracks from the band's forthcoming album Collapse Into Now.

The first track on the album is called "Discoverer" and it was made available as a free download through the band's fan club and web site.

"Discoverer" feels like a step forward from the songs from Acclerate, which means is a strange prism through which to hear this song.  Accelerate was in many ways a throwback album for R.E.M., meaning this is a song that looks forward, back.  Peter Buck's guitar has that familiar ring with just a hint of crunch.  Stipe employs the sing-shout vocal that became more prevalent post-Automatic For The People.  I haven't decoded the lyrics enough to know what he might be on about.  The only downside to "Discoverer" is the lack of a chorus.  Overall this is a really good song that feels very New Adventures in Hi-Fi / Accelerate (both of which I like).

The iTunes Music Store is selling "It Happened Today" and I decided to plunk down the $1.29 for it because I really dug "Discoverer."  I'm not feeling this one.  For starters, the opening rhyme couplet is "terrible" and "parable."  I'm sorry but that rates a big yuck.  The chorus?  "It happened today / hooray, hooray/ It happened / hip hip hooray."  That rates an even bigger yuck.  The saving grace in this song is it sounds like Peter is mixing a little mandolin with the electric and acoustic guitars giving this just a hint of "You Are The Everything" from Green.  The wordless harmonies from Stipe and Mike Mills are also good and give the song a little help.

I don't have a scoring method for any of this but I like one of the two songs and the other is merely passable.  I still have high hopes for the record when it arrives March 8.  Happy birthday, Michael.  I hope to see you and the band in Nashville or Atlanta this summer.