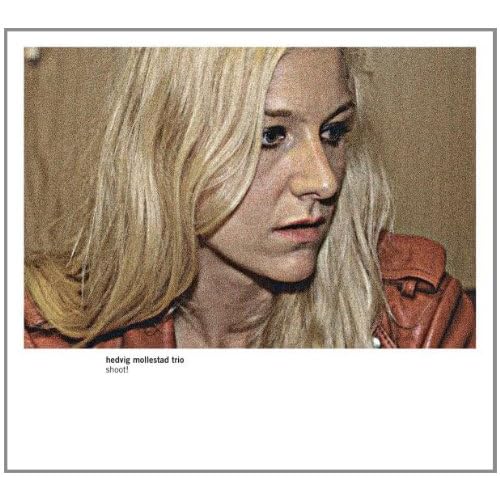 Okay, she doesn’t have the name or the look of a Jeff Beck or Jimi Hendrix, but Hedvig Mollestad Thomassen is the most exciting guitar player I have heard this year. I hate having to say this, but image is everything in music today - and this stunningly beautiful Norwegian woman plays like a soul possessed. It is hard to believe that Shoot! is the Hedvig Mollestad Trio’s debut recording, because it is a master class in how a group can meld rock and jazz in 2011 without sounding hopelessly retro.

The one thing I cannot stress enough is that Shoot! is NOT a fusion album. Not by any stretch of the imagination. The majority of the nine songs here are blues-based rock, of which we hear so little of these days. The set opens with “Gun And The E-Kid,” and we are immediately confronted with the kind of down and dirty guitar sound Jimmy Page used for Zep tracks like “Heartbreaker.” The Trio’s mastery of the blues form is evident in the break of this song, but it is really apparent on the very next cut, “Ashes.” Here Hedvig runs the scales up and down effortlessly, until bassist Ellen Brekken comes in and anchors things, allowing the guitar and drums to play off each other in a most satisfying way.

“For The Aur” is the one that sold me once and for all. Taking a page from Terry Kath’s brilliant “Free Form Guitar,” Hedvig shows us just how amazing the sound of controlled feedback can be. This is a tour-de-force of a piece, as we go from wild feedback into a straight-ahead riff ala vintage UFO, only to wind up with a killer false ending - then back again.

The jazz influence is most pronounced during “Sidetracked.” Jazz-rock, or fusion was a big early seventies genre, done best by Miles Davis on Bitches Brew, or the Mahavishnu Orchestra’s Inner Mounting Flame. But back then, nobody ever thought to go back to the classic bop sounds of the mid-fifties. On albums such as The New Miles Davis Quintet, or John Coltrane’s Blue Train, bassist Paul Chambers came up some of with the coolest bass solos ever laid down. He is an obvious influence on Miss Brekken, because her acoustic break here is not only completely unexpected, but absolutely riveting. It takes real guts to put something like this in “rock” record, and she pulls it off  with fantastic style.

Drummer Ivar Loe Bjornstad is a solid presence throughout, but his most outstanding moment comes during “No Encore.” The song opens with a drum solo, but this is no razzle-dazzle “Moby Dick” excursion. The intricate patterns Ivar sets up show a musician who knows how good he is, and has no reason to show off. There is an old adage about knowing what not to play being more important than knowing what to play. Ivar’s turn here is a testament to the wisdom of this. That is not to say that he doesn’t let it rip as well when the setting calls for it though.

The only tune with vocals (actually more like shouts) is a cover version of The Melvins’ “Blood Witch.” The song is prime grunge, and is so weirdly out of place, that it is perfect. The album closes with a slow blues ballad titled “The Valley.” This one reminds me a bit of Stevie Ray Vaughn’s version of “Little Wing,” with a guitar so soulful it’ll break your heart.

In the radio-Gaga world we live in, I suppose the Hedvig Mollestad Trio don’t have a prayer of breaking out of the word-of-mouth underground, but we can hope. Shoot! is my pick for debut album of the year, and for guitar aficionados especially, it should not be missed.