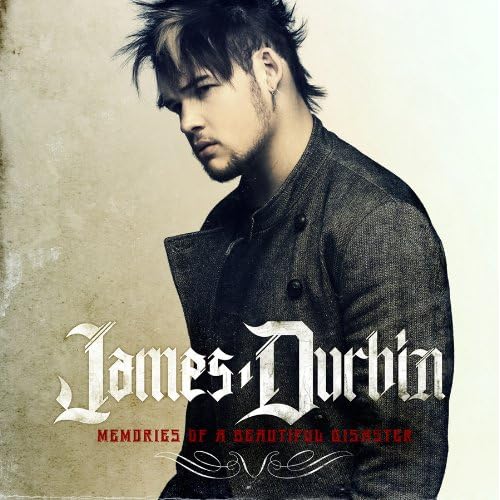 All the excitement I’d had over this album was unceremoniously sucked from my lungs when I heard the first two singles -- "Love Me Bad" and "Stand Up" -- but I’m soldiering on and reviewing it for you good people, anyway.

James had a slew of help on this album, which judging by the first efforts lent to radio, hasn’t done him any favors. Mick Mars plays on this album as well as co-wrote one tune, David Cook, Ryan Star, James Michael (Sixx A.M.), and Ben Moody (the one we can primarily blame for early
Evanescence), and Swedish Metal/Glam band Hardcore Superstar have a writing credit in this misdirected, poorly handled mess as well.

There’s a glut in the market of generic, radio rock passing itself off as metal these days, and the fact that more is being churned out would surprise me if I didn’t know how many of you all out there have under developed musical glands and happily swallow whatever the masses tell you is good. So, this record is for you, folks!

I know you all will think I’m crazy and delusional, and I am, but the opening riffs of “Higher than Heaven” sound eerily like the opening to Sebastian Bach’s “Kicking And Screaming” and much like that tune, this song is pretty great, until the singing begins. He’s AutoTune'd all to hell and it’s so distracting and really heartbreaking- I can barely stand it! Let me explain something to you before I go on: James Durbin can sing; I mean really, and honestly, coax and lift a song to a new place just because his voice is on it. Why producers felt the need to give him the Britney Spears/Katy Perry treatment will never make sense to me. “All I Want” and “Love In Ruins” begin and end in much the same way: great sound, generic lyrics and vocals.

The first (and only?) bright spot comes in the form of “Right Behind You,” which opens with a beautiful, simple naked guitar, joined by James’ voice (his real voice!) and it builds slowly: drums, pressure, desperation, and has a pleasant bass line throughout. I really like this and am surprised to find it’s penned by only James. This makes the arrangement and vocal power more clear; James must have already had a very precise vision of how this should and would sound when writing it. It’s a ballad with a rock edge (and fairly ridiculous lyrics) that masterfully caresses and compliments James’ voice and makes me dislike the previous three songs even more.

Next up we have “Love Me Bad” which I reviewed as a single and hated every second of it; believe it or not, it’s the second best song on the album so far, which is not a compliment. “Deeper” is our next treat featuring themes of loss, despair, and the usual teen angst suspects, except James is a father on the verge of 23. It feels whiny at worst and trivial at best.

This is where the reviewer bawls her eyes out. “May” is written solely by Safety Suit’s Doug Brown and from its outset, the vibe is very different, and wholly welcomed. This is a story of childhood sweethearts expecting their first baby, after the usual hardships of young romance, and the line “during birth I got my daughter/Jesus took away my May” nearly derailed my train. Anyone who’s been following me knows my Achilles heel is anything touching on parenthood and babies. This song absolutely destroyed me, and James hits all the sweet spots of his voice that I fell in love with on Idol. The entire song is almost angelic, reminiscent of the sound and tone of Mandy Moore’s version of “Only Hope“ from A Walk To Remember. I won’t saturate this with lyrics, but I am actually madly in love with this song and a little mad at myself for falling for it!

That magical moment was slaughtered mercilessly by the arrival of “Screaming,” which is co-written by Durbin, David Cook and Ryan Star- no wonder I had the sudden urge to slap a hipster. The song is trying to be anthemic and it’s just as weak and anemic as everything on Cook’s own This Loud Morning album. My irritation continues with a furious rage on into “Outcast” on which Mick Mars contributed lyrics and licks. With lines like “You’re the outcast, I cry when you all laugh” can you really blame me? The only highlight is the Durbin wail and scream that is always a thing of beauty when used in moderation, and always reminded me of the aforementioned Sebastian Bach in his heyday. “Everything Burns” is up next and yes, it does burn, in the penicillin for seven days way. Capping off this adventure is the abysmal “Stand Up” single from the NFL compilation CD. I’ve already said all I have to say about that single and having it as the last thing you hear on this schizophrenic collection of songs did nobody any favors.

Memories Of A Beautiful Disaster wasn’t the complete and utter failure I anticipated it to be, but it fell far short of my hopes and expectations. There was a bright spot or two that saved this from being a complete disaster, but it certainly isn’t beautiful.