As close to being at a Chemical Brothers show as a movie can get. 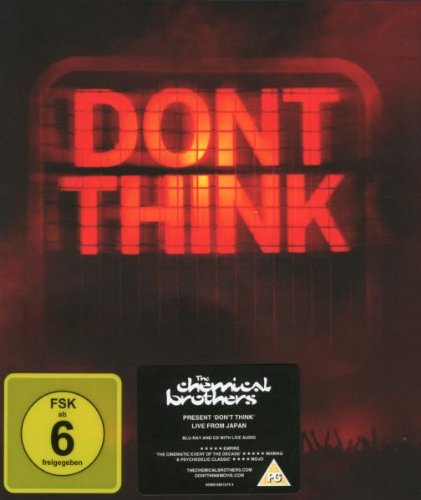 Many concert films combine performances with interviews, documentary elements, and behind-the-scenes footage to help audiences get to know the artist. The Chemical Brothers' first concert film Don't Think does not contain any of these things. Instead, it aims to replicate the experience of attending a Chemical Brothers show. Directed by longtime collaborator Adam Smith, it is as exhilarating and trippy as the real thing.

Filmed at the 2011 Fujirock Festival in Japan, Don't Think features multiple perspectives to really put you in the show. Cameras are seemingly everywhere. While several cameras are situated within the audience, overhead shots are avoided for the most part. In fact, there is exactly one moment in the film where we really get a sense of the thousands of people the Brothers are performing for. There are also a few moments where elements of the show "invade" the rest of the festival.

Since electronic musicians usually don't have a band or dancers, they rely on spectacular light and video shows to keep things visually interesting. Director Adam Smith has worked on the Brothers' concert visuals for years and it shows. He deftly integrates the videos seen during the show with audience reactions and crowd footage.

One sequence makes the abstract figures seen on the concert screen appear to float over the audience. Other sequences are precisely timed to the music. He also coordinates colors in the film to their corresponding point in the show. Concert visuals with lots of black and white lead to the show footage suddenly being in black and white.

The music featured in Don't Think is a nice mix of more recent Chemical Brothers songs with a few classics. We get hits like "Setting Sun" and "Block Rockin Beats" as well as tracks like "Saturate" and "Escape Velocity."  There are two new songs to be found: the title track (first heard in Black Swan) and "Superflash." The movie's title song, an intense burst of techno, is the better of the two.

Artists often use concerts to put fresh spins on their hits. The Chemical Brothers don't transform them the way Daft Punk did on Alive 2007 but they also don't just play the album either. Some of the best moments musically are the transitions between songs. The transition from "Swoon" to "Star Guitar" is fantastic. It features some space-age synths that build and keep you in anticipation for the full force of "Star Guitar" to begin.

Don't Think is a trippy, creepy, intense, and very fun concert movie experience. For fans, this is a no-brainer. It deserves to be played on the best home theater setup you have available (the movie is engineered in true 7.1 channel sound, a first for a concert film). If you're not a fan of The Chemical Brothers or electronic music, the movie is still worth checking out for its visuals.

Don't Think is available in both a Blu-ray/CD and a DVD/CD combo.