Restoring the power to a classic album... 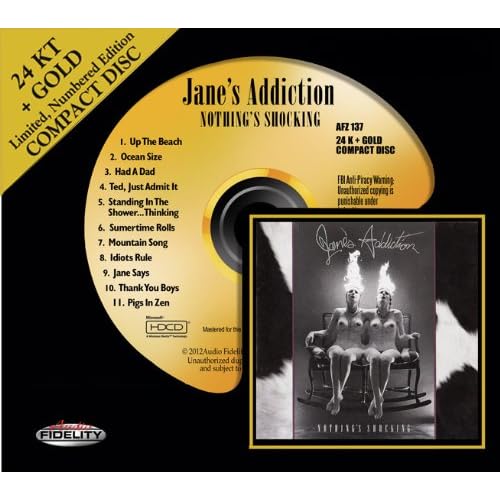 There is a piece of home video footage included in Cameron Crowe’s Pearl Jam film Twenty (2011), which says a lot. It was a shot backstage prior to a late-eighties Jane’s Addiction concert in Seattle, and just about every future “grunge” superstar is there. For a number of reasons, Jane’s were never considered a grunge band. But as this footage makes clear, their album Nothing’s Shocking was a huge influence on the whole scene.

Even though it did not sell huge numbers initially, the album was recognized as an instant classic by those who did hear it. At the time, Los Angeles held the distinction of being ground zero for hair metal. Besides that, there was the hardcore scene, mostly centered around the SST Records bands. It was almost as if Jane’s Addiction emerged from a vacuum. I remember the reviews at the time, comparing them to Led Zeppelin. This was the lazy way of saying they played heavy and acoustic with equal power.

“Jane Says” is an example of just how compelling this band could be on the acoustic front. “That’s The Way” from Led Zeppelin III is one of their greatest tracks, and least well-known. “Jane Says” reminds me a lot of it. But the “hard” was there in spades. Tracks like “Ocean Size,” and “Mountain Song,“ make it clear that this band knew how to rock with as much power as anybody. And there is the dichotomy. They weren’t hair-metal, they weren’t even metal. They were a rock band, with some very artistic flourishes. In a lot of ways, Nothing’s Shocking was the template for what would make grunge so big a few years later.

Nothing’s Shocking was released in 1988, during a very short window of time when recordings were issued on vinyl, cassette, and compact disc. But the CD mastering process was pretty simplistic at the time, and the vinyl always sounded much better. It may have taken 24 years, but the folks at Audio Fidelity have fixed the situation with the new 24K + Gold Compact Disc edition of Nothing’s Shocking.

The methodology the people at Audio Fidelity employ in creating the “ultimate” sounding CD is a fascinating one. They begin by remastering the original tapes. The next step finds the digital master being etched onto a glass disc surface in real time by laser. From this, the CD is made out of real gold, rather than the standard and often imperfect aluminum. The end result is remarkable sounding product, and that is no hype. I still have my original 1988 CD of Nothing’s Shocking, and have played it side by side with the new Audio Fidelity edition. There is no question as to how much better this new one sounds.

Like most great bands, the years have taken their toll on Jane’s Addiction. But back in 1988, they were firing on all cylinders, and Nothing’s Shocking remains a true hard-rock classic. And it sounds better than ever on this Audio Fidelity 24K+ Gold CD edition.