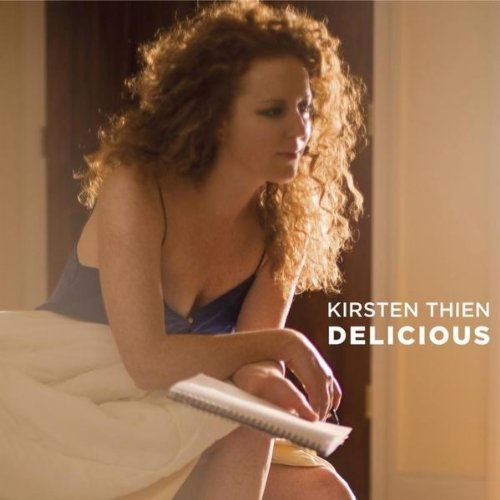 I love music that gets me up and dancing from the first note. I love music that keeps me dancing the whole album through. That’s exactly what you get with Kirsten Thien’s Delicious. From the moment I put it on the stereo the day I got it, I was dancing. I danced my way through the dishes. I danced my way through the laundry. And I danced my way through my shower. By the time I was done, I was in a great mood and off to pick up someone special from the airport. The entirety of Delicious was floating through my head as I waited and upon my return home with that very special guest, the music stopped just being an internal soundtrack and became the reason this handsome man and I began dancing as we walked through the door.

Over the course of the weekend, Thien provided us ample entertainment and inspiration. How could I not love this album? How could the weekend turn out anything but perfect?

Aside from the confident delivery of well-written songs, the artful arrangement of each tune builds and rests and builds and rests perfectly. Sexy and soulful, bold and sassy, intimate and breathtaking at all the right places, you just can’t ask for anything better.

Kirsten Thien knows what she’s doing. She puts everything she has into every song, knowing when and where and what to emphasize and for how long. She understands pacing and she understands the nature of delayed gratification, stringing us along, prolonging the delicious tease in "Taxi Love," knowing right when to pull back and then dive right in and give us all she has.

She does this over and over again, as evident in "Treat ‘im Like A Man." Thien gives the expert lesson on how to steal that man, how to keep him, and how to really enjoy him, as well as oneself. Nary a vulgar word need be spoken. You know exactly what she means as she boldly asserts herself, as she prowls, and purrs, and occasionally growls her way through the sexiest of tunes, and when she gets to the more sentimental, Kirsten knows quite well how to entice you to fall in love with her.

My guess is she pulls this off expertly during live performances, resulting in plenty of men swooning after her, women taking copious notes, and everyone sexually charged and ready to go.

I know there are bound to be too many reviewers out there who are going to be quick to jump up and compare her to known female performers. I refuse to be one of them. I hear a few influences, of course, but mostly what I hear is a vibrant woman who’s singing from way down deep within her soul. She understands the power of chemistry and she shares what she knows, not needing to rely on whether or not her voice occasionally sounds like someone else. Thien brings her own charms and talents to the table and serves up an ample and Delicious bounty of her own making.

Joined by her regular solid band and guests Arthur Neilson (guitar), Billy Gibson (harmonica), and Hubert Sumlin (guitar), along with exceptional arrangements, Kirsten Thien’s Delicious is exactly that! The only perceived misstep was "I Ain’t Superstitious." It seemed out of place at first, an oddly chosen cover, until within the first couple of verses when it all made sense. Drawing from somewhere deep within her, Thien brought a very confident and simplified version that went from "why?" to "Oh! This does, indeed, fit!" Stripped down, gritty, and spot on, Kirsten gets it all out. And then drops us right into the honey sweet "A Woman Knows," proving once again that the balance amongst the songs has been carefully considered and allowed to tell a story that feels exceedingly intimate and engaging.

From one song to another, you anticipate what comes next. And when you reach the end of the album, you’re glad you’ve set the stereo to replay so you can enjoy it all over again.

Crisp, sweet, with enough bite, Delicious is the blues album we’ve all been waiting for. That it comes from a woman hardly seems the point, but it is worth mentioning as in this day and age, very few women are able to make such an outstanding first impression without relying heavily on building a "sounds just like" or "covers the material of" disc. Instead, Kirsten Thien is confident enough to write her own material (only three covers appear on this album and she does a great job of making them her own), plays guitar on six of the tracks in addition to singing, and brings in the right musicians to fill out the arrangements in a stunning manner. If there’s a serious misstep anywhere on the entire album, I’m not hearing it.

I’m now curious enough to check out Kirsten Thien’s first and second efforts, She Really Is and You’ve Got Me, but mostly I’m already looking forward to her next release and the opportunity to see her perform in person.