Music Review: Nektar - Man In The Moon and Evolution 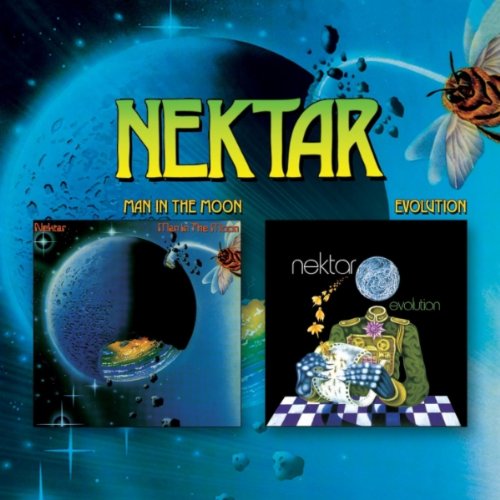 Nektar were a German progressive rock band who hit a commercial and artistic peak in 1974, with their Remember The Future album. In many ways, 1974 was the last year that prog was taken seriously in the marketplace. People quickly soured on double-Lps PP devoted to a single song (see Tales From Topographic Oceans by Yes), and punk was just around the corner. Nektar didn’t get the memo however, and pressed forward.

By 1980, they had released a couple more albums, and dramatically re-shuffled their lineup. Meanwhile, prog had bogged down into a wasteland of failed ideas, and had been largely written off. Those groups who did survive had completely reinvented themselves. Yes and Genesis were about the only ones who made the transition. Although nobody was really paying attention to Nektar anymore, they put together a very strong album titled Man In The Moon. As leader Roye Albright put it, “We found a strong outfit to play the old Nektar and also the new.”

Man In The Moon was filled with shorter, more commercial tracks than what had come before. Older fans grumbled about the change, and very few new ones were added. The album quickly disappeared. Nektar would not record again for 24 years. After their acclaimed Nektar Retrospektive compilation last year, Cleopatra Records have reissued Man In The Moon, in tandem with their 2004 effort, Evolution.

Listening to Man In The Moon all these years later, it is clear that the band had found a viable new direction to pursue. The album leads off with “Too Young To Die.” The lyrical sentiments may have been wishful thinking on the band’s part, but this prog-pop hybrid actually works quite well. It certainly makes more sense than “Abacab.” As the album spools out, it becomes clear that the foursome understood the new realities of the music biz. “Telephone” is a nice ballad, and “Far Away” is a very radio friendly track. Nektar had not quite abandoned the glories of prog yet either. The title song is a great example of this.

Faced with a complete lack of interest following Man In The Moon, Nektar went on hiatus for 24 years. The catalyst for their reformation came when they were contacted to play an Art Rock festival in New Jersey (of all places). Their successful appearance led them to hit the studio, and eventually emerge with Evolution.

From the opening keyboard bombast of “Camouflage To White,” it is clear that Nektar are back doing what they do best. This album is prog, pure and simple, with no apologies. With tracks such as “Phazed By The Storm,” and “Dancin’ Into The Void,” these guys have embraced their past wholeheartedly. The follow-up Always EP is also included in the package. This was a four-song set featuring single edits of two Evolution songs, plus live in the studio versions of two others.

Listening to this material together in one sitting is an interesting experience. With Man In The Moon we hear a band trying to slough off their past, and reinvent themselves. With Evolution we are presented with the same guys, now 40 years removed from their moment in the sun, back at it. It is a very cool package, and once again, Cleopatra have done an outstanding job in the presentation. The set comes in a deluxe, gatefold sleeve, and features an informative booklet as well. The audience for something like this may be specialized, but for anyone interested in such things, this double-disc collection is highly recommended.