A continuation of the exotic journey Martin began on his solo debut... 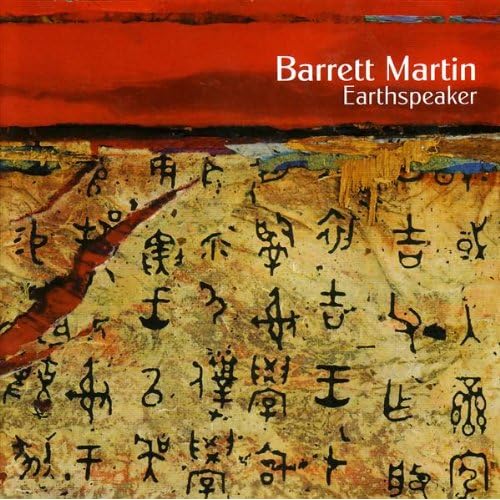 I tell people I don't like surprises but I'm not sure that's entirely true.  Journeys and destinations are inextricably linked.  It’s been my experience I appreciate journeys that lead to pleasurable or rewarding destinations.  Voyages to pain, misery, or disappointment?  Yeah, I'd just as soon pass on all that.  Do I like surprises?  It depends on what you have in mind.

I was shocked by Barrett Martin's solo debut The Painted Desert and more shocked that surprise turned out to be the kind I liked.  I don't buy many jazz or World music CDs on purpose.  Those are musical galaxies that have always felt inaccessible to me.  My familiarity with Martin's past work in the rock realm (Screaming Trees, Mad Season) made me willing to stretch a little and my faith was rewarded, all of which made me impatient to hear Martin's next musical excursion.

I was so anxious I didn't even bother to wait to get back inside the apartment to start ripping the manila envelope with the FastHorse Recordings label affixed to it.  What can I say?  I haven't grown up all that much.  I immediately began scanning the artwork and the tracklisting and my attention was quickly drawn to the album's opener, "Agbadza."

The title, derived from the name of a Ghanaian rhythm, sounded very familiar to me I wondered:  could this be the same song from Martin's Wayward Shamans' side project?  It turns out the basic melody and song structure are the same, although there are differences between the two versions.  The Wayward Shamans' version includes some harmonious vocalizations.  Those are gone from Earthspeaker.  The vocal passages have been replaced by increased use of horns and the addition of a flute.  This version has been slowed, slightly.  At the moment, it is my favorite song on both of the two albums on which it appears.  "Agbadza" isn't the only Shamans track to be re-worked for Earthspeaker.

Of the next two tracks, "The Tipping Point" is my favorite.  "Pattern Recognition" is quite good as well.  Three songs in and we have a winner, right?  I think so, but fourth track "She Smiles" is just a little too sweet for me.  It is nowhere near terrible but it does not feel like it gels well with the previous three songs.

"The Conjuror" might be more similar to The Painted Desert than anything else on Earthspeaker (and I mean that in a good way).  "El Barrio" has a great melody.  It would be unfair to label the song as having a "dark" sound to it, but there is certainly mystery.  Maybe "dark" comes to mind because of its proximity to "She Smiles."  Maybe "dark" is just an overused adjective.  Trumpet, flute, saxophone advance to and retreat from the song's front, all anchored by the outstanding rhythm section of Martin and upright bassist Luis Guerra.  "Nocturne" adds both a sinister and seductive vibe to the mystery of "El Barrio."  "A Line in the Sand" allows multiple musical ideas to exist at the same time.  You can listen to it over and over and feel like you are hearing a different song each time depending on which ideas your ears and mind decide to focus on.  "Mandala" and "Deus Ex Machina," two of the album's closers, are also standout tracks.  "Deus," like "Agbadza," was first heard on the Wayward Shamans' record.

Earthspeaker does not travel new sonic ground, which can make it sound more like a continuation of Desert than an actual follow-up.  By now you have gathered that I like this new album and am in general a fan of Barrett Martin, but you might be wondering what it all sounds like, this album.  It is a fair question and one that I struggle to answer.  One of the easiest and most common tricks of the music trade is for a reviewer (I am not a big fan of the word critic) to compare and contrast the subject album with other works to try to give the prospective listener a frame of reference.  It is a useful device but can become a crutch.  Unfortunately it is a device that is not available to me with this review.  The only thing like Earthspeaker I have in my collection is The Painted Desert and perhaps Alchemy.

Here are some of the instruments utilized in the crafting of these songs:  Drum set, Fender Rhodes, piano, Vibraphone, Electric, Acoustic, and Classical Guitars, Indonesian Gamelans, African Drums, steel drums, Japanese koto, hand percussion, and synthesizer - and those are just the instruments Martin plays himself.  Also present on the album is upright bass, African drums, tenor saxophone, trumpet, flugelhorn, flute, gamelans, and frame drum.  These are not the sounds you would expect to hear on album by a guy who used to drum for Screaming Trees, but there is a place for them and Martin has again done a wonderful job of incorporating all of them.

The good news, for those of you who might find a group of strange, unfamiliar instruments daunting or a turnoff, is that these compositions are not difficult listening.  Martin's work on Earthspeaker, and The Painted Desert before it, is a great juxtaposition of the ancient and the modern, world and 'American,' the exotic and the accessible. Think of it as an American approach to world-jazz music.