A beautiful tapestry of stories and sounds... 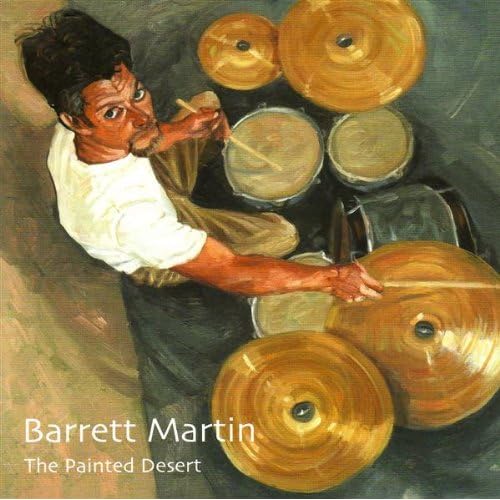 Barrett Martin has been fortunate in his friends throughout his musical career.  The Olympia, Washington native has played behind two of the most distinguished voices of the 90s alternative generation.  His work with Mark Lanegan and Screaming Trees came during the band’s commercial peak.  Internal squabbles, personal differences, and other stresses brought Trees to a halt.  He drummed (as well as contributing other instruments) on the Mad Season album with Layne Staley and Pearl Jam’s Mike McCready (as well as Lanegan and Baker Saunders).  McCready had hoped to make Mad Season on ongoing project.  Sadly that was not to be.  He also co-founded Tuatara with R.E.M.'s Peter Buck and collaborated with R.E.M. when Bill Berry retired from music.  If he had decided to call it quits most people would look upon that as one hell of a run.

Martin was not satisfied.  In the time since he has started his own record label (Fast Horse) and released his first solo album in 2004,The Painted Desert.  Most rock fans approach solo albums from drummers with trepidation- and with good reason.  Too many of these turned out to be atonal warbling by drummers who thought they could sing or hour-long tributes to Zeppelin’s "Moby Dick" (Bonham was a great drummer, but enough!).  The Painted Desert suffers neither of these fates.

There is no atonal warbling to be heard on this album, as there are no vocals.  There are no 27-minute drum solos.  Martin has carved a different path on Desert, which he writes about in the liner notes to the album.  He has left his rock and roll days behind him (for the moment) to study and explore World music.  He traveled the globe to listen and study music from Africa, South America, and Australia.  The Painted Desert marries his musical past with the different types of music he studied and the many new instruments he learned to play.

What does this Desert sound like? He and his collaborators (yes, even with all of the instruments Martin plays himself he does find plenty of room for others to contribute) have fused elements of American Jazz with elements of World music to create a consistently engaging album- one that is accessible and challenging at the same time.  The Painted Desert is a beautiful tapestry of stories and sounds.

Naming the first track on an album after the greatest heavyweight champion in boxing history is a bold statement.  "Muhammad Ali" uses trumpets to create a celebration.  "Mirage" has a sinister edge to it.  A mournful saxophone melody is interspersed and repeated throughout "Afterlife Architecture" and is one of the finer moments on the disc.  "The Worm" grooves beneath Skerik’s (Tuatara) baritone sax work.  "Escuro" features some subtle vibes work from Martin and fancy flute work from Craig Flory.  Martin creates the sound of rain on "The Rumor of Rain."  There is a mysterious, dirge-like feel to "The City Slithers."  "Survival Portuguese" picks up the tempo and the mood of the album with some nylon string guitar from Luis Guerra and more flute from Flory.  "Favela Song" sounds like a journey with its combination of trumpet and percussion.  "A Waltz Under the Stars" is simple and pretty.  "The Diamond Path" is a gentle, understated way to close the album.

Fans of Martin’s previous musical partnerships might be bewildered or turned off by The Painted Desert.  Fans of music will not.