Fascinating collection of works from the legendary composer. 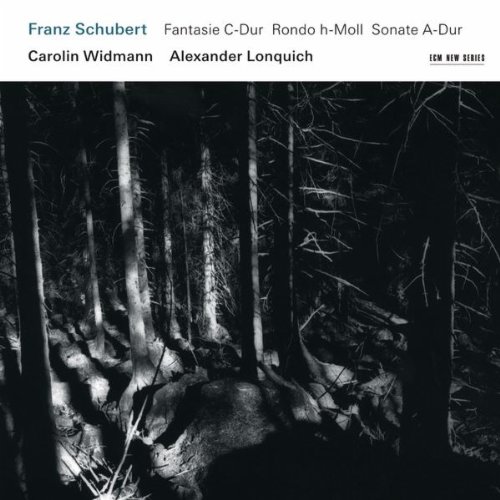 One of the more notable features about recordings on the ECM New Series classical imprint is the artist’s tendency to shake things up a bit. Often we will find the musicians linking various, unrelated compositions together in unexpected ways. This can take the form of placing current works next to established classics to illustrate the themes. Or, as in the case of the new Carolin Widmann (violin) and Alexander Lonquich’s (piano) Franz Schubert: Fantasie D-Dur, Rondo h-Moll, Sonate A-Dur  release, the pieces may all be written by the same composer - at very different times in his career. In this way we clearly see how his work developed over time.

Franz Schubert (1797-1828) died at the young age of 31, but he left behind an enormous body of work. Sadly, his compositions were not really appreciated in his lifetime, but later composers such as Schumann, Brahms, and Mendelssohn came to see him as a pioneer of what we now call the Romantic era of classical music. The term “Romantic” is certainly well chosen for Schubert’s music, as this recording shows. The music tells a story, and it is little wonder that later masters came to appreciate him so much.

The disc opens with “Fantasie D-Dur” (1827). It is a five-part piece for piano and violin (as all three of these compositions are). This is followed by the two-part “Rondo h-Moll,” (1826), and finally the earliest piece - “Sonate A-Dur” (1817). It is interesting to listen to the compositions in this historically reverse order. By 1827, Schubert had most definitely “come into his own,” having shed much of the early Beethoven influence that underscores much of the “Sonata.” The “Fantasie” is certainly the most complex of the collection, covering a wide range of moods, and quite effective.

If I were to vote for a “favorite” of the three pieces though, it would have to be the “Rondo.” The first part is in the Andante tempo, which is typically described as at a “walking pace.” It is not the metronomic beats that sets it apart for me so much as the striking drama between the piano and violin. The second portion of the “Rondo” is in the Allegro tempo, which is much faster than Andante. This is the lengthiest track of the recording, at 11:31. There are moments during this piece which seem to have been a direct influence on Tchaikovsky (1840-1893), especially his famous ballets. In any event, the Allegro portion of the “Rondo” offers an extended opportunity to hear these two incredible musicians playing at the very top of their game.

As previously stated, the “Violin Sonata” is the earliest composition, from 1817. Schubert was 20 when he wrote this, and while critics often cite Beethoven as his primary influence, one hears his own personality and style emerging triumphant. This is quite a showcase for Carolin Widmann, and she handles it with remarkable flair. Where the piano often took the lead in the “Fantasie,” here Alexander Lonquich’s role is in much more of an accompanying position, although it sounds marvelous throughout.

In fact, one of the most striking elements of this album is just how gorgeous it all sounds. I was immediately taken in by the purity of tones. One factor is the location chosen to record in, the historic concert hall Reitstadl Neumarkt, which contributes a glorious ambience to the music. It is the two musicians themselves though who really make this celebration of Schubert shine however.

In the liner notes, Hans-Klaus Jungheinrich calls this set “A magically iridescent poem of changing colours, melodies, and counterpoints.” I could not agree more. The music chosen, and the performances themselves are spectacular. This is another spectacular entry in the ECM New Series.