There are some familiar motifs and rhythms that any longtime blues listener can spot from a mile away.  Fats Domino might not be the first artist to make use of the bass line to "Blueberry Hill," but variations upon the theme have anchored countless blues cuts over the decades and the Willie Dixon-penned, Muddy Waters classic "Hoochie Coochie Man" has been ripped off and re-written more than that.  These are but two examples that have formed the basis of thousands of songs, extending back to an era when liberally borrowing from friend and 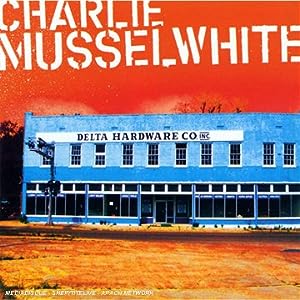 competitor was not a fast track to an instant lawsuit.

Charlie Musselwhite uses familiar blues devices in unfamiliar ways on Delta Hardware.  He reaches back to his roots for inspiration, but this is no nostalgia record.  Some blues albums are so overtly blues they could never be mistaken for anything else.  Some blues artists use their music as a means of exorcism and catharsis and there will be no subtlety in the music, delivery, or subject.  That kind of rawness is one of the distinctive and most engaging aspects of the genre.

However, it is possible to make a blues record with nuance and Musselwhite does that here.  He is mining his roots for inspiration, but the influence is not painted on the walls.  Muddy Waters' classic tells us "The Blues Had a Baby and They Named it Rock and Roll." WithDelta Hardware, Musselwhite has adopted that baby and taken it back home.  Instead of filtering the blues through rock and roll, rock and roll is being channeled through the blues.  The traditional elements in these songs could have led to pleasant, fun, but obvious music.  Here, it feels fresh and vital.  This is still the blues, but not in all the obvious ways.

“Church is Out,” nominated for Song of the Year, is a fabulous opening sermon in the newest chapter of the Charlie Musselwhite ministry.  It combines a massive guitar riff with an indifferent vocal evoking “Sultans of Swing”-era Mark Knopfler.  That dominating riff rings large enough and loud enough to make Keith Richards jealous.

"One of These Mornings," one of two Little Walter covers on Delta Hardware ("Just A Feeling" being the other), is a hard-charging shuffle propelled by the ubiquitous drums-as-oncoming-train rhythm and Musselwhite's wailing harmonica as the train's siren-like whistle.  "Sundown," a Musselwhite original, borrows from Muddy Waters' arrangement of Slim Harpo's classic "I'm A King Bee."

The masterwork of Delta Hardware is the shadowy "Black Water." This track is an example of the power that is generated when music and lyric blend perfectly.  The amplified effects on Musselwhite's mournful harp make it sound like it was recorded underwater.  The murky sound of Chris 'Kid' Andersen's skillful touch adds another layer to the haunting, mysterious atmosphere.  Musselwhite's laid back vocal allows his harp duel with Andersen's guitar to provide the emotional center to these words of apocalyptic warning.

The ferocious swagger of "Just a Feeling" breathes fire and gives the album momentum through its final tracks.  Delta Hardware is a lean, muscular record without filler — ten songs, 40 minutes.  The song lengths are varied as are the tempos and the sounds.

This is a basic harmonica, guitar, bass, drum configuration but producer Chris Goldsmith assists the players in finding great tones and effects for the instruments.  In addition to the sonic variety in the instrumental texture, Musselwhite's vocal attack is also varied, running the gamut between gritty and detached.  The performances and production achieve a level of excellence rarely heard these days.

I don't know exactly what I was expecting when I first listened to Delta Hardware.  I think I was suspicious this might be another case of one of those wily veterans who had stuck around past his prime and was getting nominations based on past glories.  Musselwhite has been a fixture on the blues scene since the release of his 1966 album, Stand Back! Here Comes Charley Musselwhite's Southside Band (the misspelling of his name is the fault of his label).  My skepticism seems silly when you consider I had never heard a lick of Musselwhite's music prior to Delta Hardware.  I have still never heard anything from his so-called prime, so I can't tell you whether or not he used to be better.  What I can tell you is no matter how good he might have been 40 years ago, he is not embarrassing himself now.