DKM have written a grand concept album built on the themes that have always been part of their work... 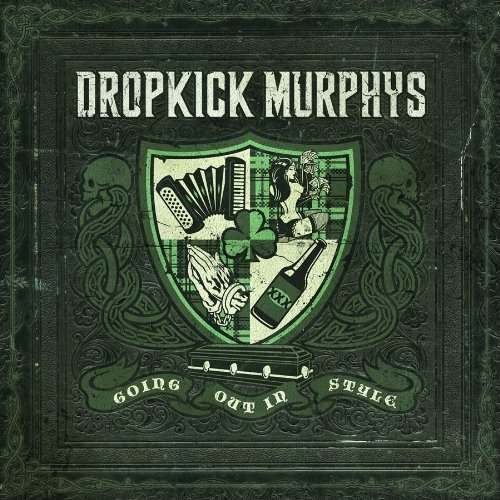 This latest outing for the Dropkick Murphys is the grandest of concept albums. Going Out In Style tells the story of one Cornelius Larkin, a 73-year old, newly deceased gent who immigrated to the States when he was a teenager. The character of Cornelius is a fictional one, as are some of the stories told on GOIS. But according to bassist Ken Casey, the songs “are odes to our grandparents, friends, and loved ones.”

The story begins with young Connie’s departure from Cobh Harbor, a spot famous for the millions who emigrated from Ireland to the Americas. As a young man, he fought in the Korean War, returned to the States and married Margaret Brosnahan. At the time of his death decades later, he left his dear Peg, “seven sons” (note that the DKM is a seven-member band), and numerous grandchildren. He also left lots of stories, rich with laughter and heartbreak, war and work.

These stories fill the album of Going Out in Style.

Story telling has always been a strength of the DKM. Whether done with a full blown skinhead sensibility as on their 1997 Do or Die album, or a more traditional Celtic feel like 2007’s The Meanest of Times, these boys stay true to similar themes. These themes are strong as ever on GOIS, there are songs that celebrate family roots, the horrors of war, sweet love, and of course, appreciation of a good party.

Another recurrent theme honors the working man. Beginning with a quick paced banjo intro, “Take ‘Em Down” is sure to be a concert favorite; the foot-stomping, hand-clapping, mug-swinging lively scheme is built in from the beginning. Coupled with the simple but powerful lyrics, this track is an anthem for union pride. “When the boss comes calling – Don’t sell your soul/When the boss comes calling – We gotta organize.”

And on February 22, 2011, the DKM posted a statement on their website calling for solidarity with the Wisconsin labor unions, and released the “Take ‘Em Down” track. Also they have a limited edition t-shirt of the same name, and the sale proceeds will benefit the Worker’s Rights Emergency Response Fund.

The title track “Going Out In Style” is just as pleasing - the most defiant of last hurrahs and a fun shout-out to Boston personalities and famed locales. This song also features vocals by NOFX’s Fat Mike, The Living End’s Chris Cheney, and comedian/actor Lenny Clark (Rescue Me). The video that depicts this rowdy Irish Wake includes a few other famous faces as well (see below).

Other tracks of note:

“Deeds Not Words” – Scruffy Wallace’s pipes carry a simple melody line, solo in the intro, and then meshes with fierce vocals and peppy drumming to produce a rather menacing song about sin and retribution.

“Broken Hymns” – One of the prettiest and saddest of the lot, it begins with simple drumming and picking, and then progresses into a near dirge saluting the war dead.

“Memorial Day” – has a little less punk, more folk feel, rather like an up tempo Decemberists song.

Peg O’ My Heart – Not your Grandfather’s Peg. This re-worked classic features a new time signature and the voice of some guy, Bruce something-or-other, wait, it’ll come to me…Springsteen.  Yup, the Boss was happy to contribute his vocal talents to this album.

The Dropkick Murphys don’t appear to be going “out” just yet, but they are still going in style.