They'll be the Stones until they say they're not... 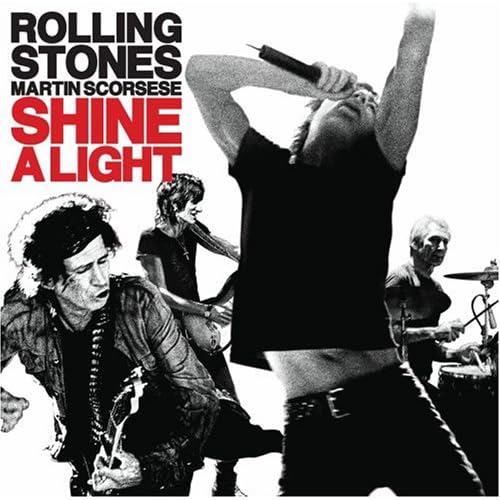 It had to happen.  It's more reliable than any other regularly occurring phenomenon we have.  If the Stones tour, there will be a live album to document it.  Sure, they released the Biggest Bang DVD box set through (Satan)Best Buy last year, but that was DVD only.  Thanks to Martin Scorsese's film Shine a Light, we finally have a CD companion to their most recent tour.  The film is in IMAX theaters now and we have to assume it will be made available on DVD in the near future; we can hope it will also come to us on Blu-ray DVD, giving us our first HD Stones tour document.

Even folks like me who are live-album junkies, it can get a bit wearing trying to keep up with all the live releases from this band.  How essential are these anyway?

Aside from there just being too damned many of them, there's something that plagues nearly all LDS live records- that's Latter Day Stones, by the way.  The tempo, pitch, key, and vibe don't have as much variation when this incarnation of the band plays as they do on record.  It's almost possible to tap your foot and sing the lyrics to "Satisfaction" when they're playing "Jumpin' Jack Flash" or "Brown Sugar" when they're playing "Honky Tonk Woman" and sound perfectly attuned to what is happening on the stage.

It's not a fatal flaw because despite that and the occasional fuck up from the band, these guys still bring enough energy and musicianship to drown out every late-night talk-show host who has ever made them a punch line as the poster children for everything past its expiration date.  If David Letterman is reading this and wants some new material, here's an idea:  Mick Jagger is the planet's #1 source of renewable energy, and I'm not just talking about the twelve tribes he's fathered.

I haven't seen Shine a Light yet, but I know how much energy Jagger was emitting on the Bigger Bang tour and this is from that same time frame.  He's still incredible.  As for the Scorsese effect, it doesn't really come across on the soundtrack and I have a sneaking suspicion it won't in the visual presentation of the band, either.  These are the Stones. You can't stop the Stones from being the Stones, you can only hope to contain them - and why would you want to try and contain them anyway?  The best thing Scorsese can do is try to capture them.  I can't wait to see if he did.

While I'm stuck on this subject of the Stones being too old – as if they need defense from me or anyone else – they provided the best defense imaginable in the form of the immortal Buddy Guy who joined them on their ferocious cover of Muddy Waters' "Champagne & Reefer."  Listen to the smoke and fire coming from Guy's impassioned vocals and his pyrotechnic guitar and tell me he's too old to be on stage.  Guy, nearly ten years older than any member of the Stones, still has more piss and swagger than any living artist.  Retire?  These guys?  Never.

As far as expiration dates go, "Jumping Jack Flash" should be way overdue and has no business still sounding this good this many years later, but even if it has slowed down just a little, these guys still play the hell out of it.  It's the same with all the classics they continue to play, year in and year out.  They make you happy to hear a song you thought you were over.

That may be the greatest trick of their legendary career.  Every time we think we're ready to leave them behind, to relegate them to the back of our minds as great memories, they kick up an unholy noise and remind us they're still here and that they'll be damned if us littles are going to heap a shovelful of dirt on them.  Why fight it?  They're the Rolling Stones and they'll be the Rolling Stones until they say they're not.