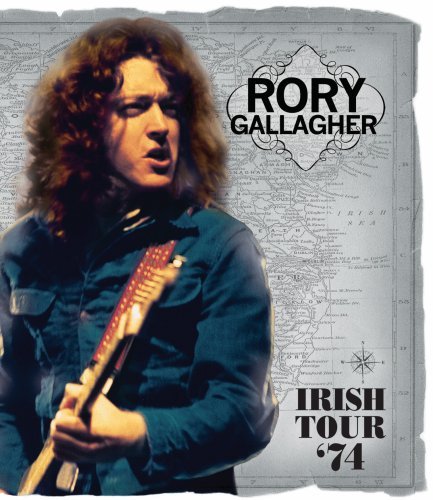 "Rory, Rory, Rory," chants an Irish crowd sometime in 1974, and as the tension builds, we know that tonight will be something special. Tony Palmer's brilliant document of those dates, titled Rory Gallagher: '74 Irish Tour captures all the greatness of Rory and his four-piece band onstage that season. The performances alone make this a definitive Gallagher concert film, but Palmer's cameras also show us what was going on around the island at the time - making this one of the great "rock-docs" of all time.

Touring Ireland was a dicey prospect in the early seventies. This was a time of serious violence, heavy political unrest, bombings, and kidnappings. Rory Gallagher (1948-1995), native son of Donegal (later Cork), Ireland was determined to tour his homeland however, no matter what the risks.

The nascent genre of rock documentary film was still developing when Palmer's cameras followed the band around that year. What they acquired, and later edited into the resulting 82 minute film solidified much of the vocabulary that these types of pictures would employ from here on out.

Opening with a beautiful shot of the waves crashing against the unforgiving Irish Moors, the film then goes into something of an "overture." The band are onstage somewhere in Ireland performing the searing instrumental "Walk On Hot Coals" for a rapt audience.

After this brief introduction we go backstage before the gig. The band is shown getting ready for the show, tuning up and knocking back Guinness. We meet bassist Gerry McAvoy, keyboardist Lou Martin, and drummer Rod de'Ath, as well as Rory - who is trying out various guitars before settling on his trademark Stratocaster.

The cameras follow the group to the stage, where we hear them being introduced, and there is a slight sense of deja ju. True or not, it certainly looks as if they get lost on their way to the stage ala Spinal Tap. After watching Irish Tour '74, I think that Rob Reiner used it as much more of a template for what he ultimately produced than Scorecese's more celebrated The Last Waltz (1976). I also think that it was done in homage rather than in any sort of mean spirit, because the way Palmer intersperses footage of Gallagher's life (and of Ireland in general) with the appearances is genius.

Nowhere is this better shown than with "Going To My Home Town." It is a skiffle tune, which Rory pulls out his mandolin for, while the crowd joins in by stomping their feet. In a voice-over, Gallagher explains that he plays Belfast and Dublin "Because nobody else goes there." The band and the crowd are having a great rave-up to the song, as the music makes clear.

But outside, things are different. Palmer's cameras capture the brutal reality of what life in the war-torn communities was like at the time. There is footage of soldiers on patrol, bombed out buildings, deserted streets, and a generally bleak landscape that looks like it could erupt at any moment.

Throughout the nine songs that make up the performance, Rory plays like a man possessed. Whether it is straight blues, slide, tearing down the house with one of his incredible solos, or just a goodtime tune like "Hands Off," Rory Gallagher rocks the house. For the most part his band ably back him up, but on the encore finale "Bullfrog Blues" he gives them all ample solo space to shine.

It is little wonder that since his premature demise in 1995 there have been more tributes in the form of statues and streets renamed for Rory Gallagher than for any other Irish rocker. Although any fan of blues/rock guitar can hear just what a master the man was, to the people of Ireland he was a true hero. This is very effectively shown in Irish Tour '74.

There are a couple of nice bonus features on this newly remastered and reissued DVD. The first is a half-hour documentary from his 1972 Irish tour, titled "Rory Gallagher: Music Maker." The second is a ten-minute home movie from 1974 chronicling the band's tour of Japan, titled "In Your Town."

Watching Rory live is unquestionably great, and the behind the scenes material is fascinating without a doubt. But if you want just the music, the soundtrack is another way to go. I just recently rediscovered my love of vinyl, and the 180-gram double LP Irish Tour '74 has been one of my favorites of late. It reminds me of listening to classic old Rory albums such as Rory Gallagher (1971) or Against The Grain (1975), when vinyl was the only format to hear him on. The remastered quality and deep grooves make the LP the only way to go on the soundtrack, at least for me. It is also available on CD however.

Rory Gallagher never made much of a chart impact in the United States, but those in the know were into him in a big way. For fans, and for the curious alike, Rory Gallagher: Irish Tour '74 (in any format) is an excellent reminder of why this guy is still so well-respected around the world.