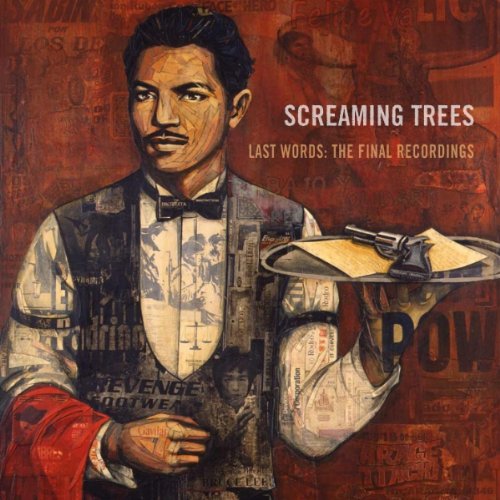 Screaming Trees formed before many of their Seattle brethren and were partially swept up in the '90s alt-rock revolution that centered on the Emerald City, yet they didn't reach the same commercial highs. I love Alice in Chains, Nirvana, Pearl Jam, and Soundgarden but I've always been bitter about Trees' comparative lack of success; there's just no accounting for taste with the masses.

Trees got some radio play for their single "Nearly Lost You" from their Sweet Oblivion record as well as the ubiquitous Singles soundtrack. Their follow-up Dust was a spiritual, haunting, spectacular piece of work and one of the best albums of the decade. Naturally it failed to garner much commercial attention. Some of that is because the album wasn't made for radio and some is likely due to the fact that by 1996, "Seattle" was on the way out; Kurt Cobain had passed away, Alice in Chains released a record they couldn't tour behind because of Layne Staley's health, and Pearl Jam was hiding from the hellhounds of fame on their trail. Soundgarden and Screaming Trees released Down On The Upside and Dust, respectively, and both bands went their separate ways.

The winds of change blew at the end of the 20th century and the band commenced work on a self-financed album to be produced by their drummer and multi-instrumentalist Barrett Martin. On June 25th, 2000, Screaming Trees played what would be their final show. The sessions for the record were shelved, neither mixed nor released. Twelve years later, the record has finally been mixed, mastered, and released.

It's a matter of record Trees had a tumultuous history (there are brothers in the band, for crying out loud!). I mention this not to relive any soap operas but because that tumult is relevant to the record we have in our hands today, Last Words: The Final Recordings.

I had mixed emotions when I learned new Screaming Trees music was headed our way. Sure, I was overwhelmed with enthusiasm having loved this band for years. Who wouldn't be excited by new music from one of their favorite bands? And yet the prospect of another final chapter opened some old wounds. I made peace with their passing and embraced the elegiac Dust as their last will and testament as a band. New music -- especially in the form of an album with the words 'The Final Recordings' in the title -- meant saying goodbye once more.

Last Words feels like a great novel with a distinct beginning, middle, and end and with many great works it's satisfying throughout but particularly so at both ends. It's important to remember this is not a collection of outtakes lazily assembled as an obligation to fulfill a record contract. This was intended to be an album, and that it is.

"Ash Gray Wednesday" is a forceful opening blow and a reminder that no matter how great Lanegan is as a solo artist and singer of acoustic dirges, he is peerless as a rock vocalist. "Ash" segues sublimely to "Door Into Summer" and the timelessness of Screaming Trees at their best is alive.

The idea of adding distortion and reverb effects to Lanegan's voice is one I'd object to strenuously but it sounds so damn cool on the sinewy "Crawlspace." The plaintive, crying guitars of "Black Rose Way" add to the drama of his repeated refrain to "call on me," piled on top of a rhythm built by Martin's steady drumming and accented by his Fender Rhodes figure. "Anita Grey" anchors the final chapters of the album, giving one final highlight before the title track closes the book on the album and career of one of my favorite bands.

My mix of apprehension and excitement was prophetic. Last Words is fantastic and reminds me of everything I've ever loved about this band. Their canon is strengthened by the addition of these 10 songs and if these are their final words, Screaming Trees will have again gone out on a high note. Parting is such sweet sorrow.