The Fall's latest is another step forward for the amazingly versatile Mark E. Smith. 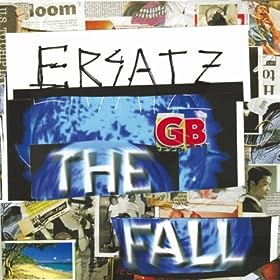 The Fall’s latest release Ersatz GB is the group’s 29th  studio album. Their first, Live At The Witch Trials came out in 1979, and there have been so many permutations of the group since then they could fill a book. The Fall has always been the Mark E. Smith show, he is the only constant in the band’s 33 year history. If one were to include the various live recordings, compilations, and Smith’s two solo records, the total number of releases is over 100.

I mention all of this because one might expect the level of quality to have declined somewhat over time. Not so. Ersatz GB finds The Fall sounding better than ever. Besides Smith, the current lineup features David Spurr (bass), Eleni Poulou (keyboards, vocals), Keiron Welling (drums), and the uncredited Pete Greenway (guitar). I have no idea why Greenway did not receive credit here, as his guitar work (besides Smith’s vocals) virtually defines a number of the ten songs on Ersatz GB.

Mark E. Smith’s vocals have always been a "love it or hate it" proposition. To his credit, he has remained consistent with a unique singing/speaking style all his own. Smith sings nine of the ten tracks, with Eleni Poulou taking the lead on “Happi Song.” The reason I mention Greenway’s guitar is the wild surf element he adds to so many of the cuts. The combination of Smith’s vocals and Greenway’s guitar on “Taking Off,” “Nate Will Not Return,” and “Mask Search” sound great. I guess Greenway does receive a credit with a song titled simply “Greenway.” That one is basic, raw rock and roll, and again the combination with Smith’s vocals is very effective.

As previously mentioned “Happi Song” is sung by Eleni Poulou. Her vocals remind me a bit of the late Nico, of all people. Not so much the later, seriously doomed Nico, but of her singing on “I’ll Be Your Mirror” from the first Velvet Underground album. The wildest tune on the album for me is the 8:08 track “Monocard.” The song opens with a full two-minutes of instrumental introduction, then Smith comes in. He has always championed the late Captain Beefheart, and on “Monocard” you certainly hear it in his vocals.

The tenth and final cut is “Age of Chang,” which takes me back to earlier incarnations of The Fall. There is a pronounced experimental dissonance on display, which hearkens back to their original “post-punk” sounds. It’s a great piece of music. A lot of years have passed since Live At The Witch Trials, but Mark E. Smith has always maintained his presence as one of the most original and forward thinking musicians in rock. If you will pardon the pun, Ersatz GB is yet another step forward for The Fall.