During the early ‘90s, the independent music scene blew up. Suddenly there were so many great “alternative” bands out there that it became difficult to keep up. I always felt that Bettie Serveert were a group who never really broke big because of this. They released some great records, and received  good (if limited) press, but they were still something of a well-kept secret. To those of us who were listening though, they were one of the finest groups going. 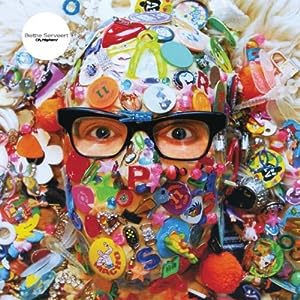 Their first two albums Palomine (1992) and Lamprey (1994) were just about perfect in my book. And now, some 21 years after their debut, Bettie Serveert have released their 10th album, Oh, Mayhem! For starters, this is a very, very good record. It also puts them in some select company. The list of bands who have been able to maintain such a high quality of music for 21 years (and counting) is small. But the Dutch foursome who call themselves Bettie Serveert are definitely one of them.

The album opens with “Shake-Her,” and it is an excellent example of what they have always done so well. Not to make a blanket generalization, but it seemed like there was something in the air in the early ‘90s that a lot of indie-bands had in common. The music was a hybrid of punk and power pop that proved irresistible. Bettie were masters of the genre, and “Shake-Her” shows that they have lost none of their original vision.

One of the big highlights of the band for me is the bass playing of Herman Bunskoeke. He has a brilliant style, which is especially evident on “Sad Dog.” Then there is the guitar of Peter Visser. He coaxes some wild sounds out of his axe on “Monogamous,” as well as “Receiver.” And the vocals of Carol van Dijk have always been a major attraction. Is there anyone else who first thought Carol van Dijk was actually named Bettie Serveert back in the day? Maybe it was just me. For those who might be curious though, Bettie Serveert actually translates to “Bettie Serves,” and is a reference to the autobiography of the Dutch tennis star Bettie Stove.

The band are at the top of their game here, and one reason may have to do with the way the album was recorded. As Visser explains, “When we booked the studio, half of the songs still had to be written. This turned out to be a benefit, as the record is very spontaneous. All the instruments were recorded simultaneously. The advantage is that you can look each other in the eye while playing and there’s more interaction, you can feel the energy.”

This spur-of-the-moment process worked to great effect on many of the tracks, including exceptional “I Promise.” My favorite song would have to be the concluding “D.I.Y.” though. I feel like an old-timer explaining this, but what the hell. For those who are unfamiliar with the abbreviated term “D.I.Y.,” it stands for “do it yourself.” That was the mantra, as laid down by the late ’70s punks. The music of accomplished veterans such as Pink Floyd and Led Zeppelin may have been great, but it was intimidating as hell. The do it yourself ethic was to say to hell with it, and just bash it out. This attitude was the basic punk credo - and the precursor to alternative, or indie rock.

With “D.I.Y.,” the group play both hands against the middle, and it is a beautiful thing. The tune is as bare-knuckled as they come, with the addition of some fantastic guitar pyrotechnics courtesy of Visser. The song is so good that it prompted me to listen to the whole album again. It may sound strange, but I wanted to make sure that my nostalgia for the band’s early work, and for the whole alt-rock era was not clouding my judgement. The truth is, when I first heard about this release, I had my trepidations. 21 years in the game is a long time after all.

The fact is, the band are as great as ever. They have a distinctive style which has served them well, yet it never feels like they are repeating themselves. When we look back at that whole indie-rock scene of the early ‘90s, it seems like it was sort of a last hurrah for rock and roll. Sure, there have been some cool bands who have come along, such as The Strokes, or the White Stripes. But there has never been anything like that big alternative explosion since then, and I kind of doubt that there will be again. The music world is just too splintered for something like it to happen anymore.

So here’s to Bettie Serveert, who are keeping the flame alive with Oh, Mayhem! It is an album which should appeal to fans both old and new. I believe it to be one of their finest efforts yet.