The mysterious "vaults" have yielded another musical treasure... 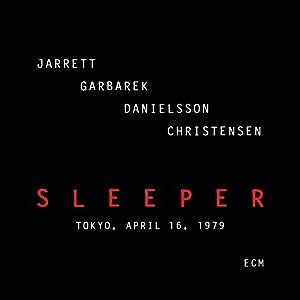 This is quite a find. Manfred Eicher’s ECM Records has been in business for 43 years now, and for the first time in the label’s history, they have raided the vaults for an outstanding, and previously unreleased concert. Sleeper is the title, and the artist is Keith Jarrett. The concert was recorded in Tokyo on April 16, 1979, with one of his finest quartets.

The magnificent piano of Mr. Jarrett is accompanied by Jan Garbarek (saxophones, flute, percussion), Palle Danielsson (double-bass), and Jon Christensen (drums, percussion). Sleeper is the perfect title for this two-disc set, for it will undoubtedly cause quite a stir in the jazz world now that it has finally been released.

This quartet produced some of the finest music of Keith Jarrett’s long career. Based on the nationalities of the members, the grouping was often referred to as Keith’s “European Quartet.” Another moniker for them was the  Belonging band. Belonging was the title of the first album the four recorded together, a studio set from 1974. The quartet’s output was uniformly excellent, albeit too brief for many of us. Besides Belonging, their discography features one more studio album, My Song. The two remaining releases were Nude Ants, and Personal Mountains. Both were live recordings from the same 1979 tour that is represented on Sleeper.

The quartet were absolutely on fire from the very beginning, with a 21:12 version of “Personal Mountains.” Keith Jarrett is a pianist of enormous depth, and his playing is venerated by millions of fans all over the world. Besides his genius playing though, the saxophone of Jan Garbarek is a revelation. Of course to his fans, this is certainly no surprise, and he has had a remarkable career as a leader himself. But hearing him in this context is something else again. Truly phenomenal.

There are two songs that the quartet played on all three of these concerts. These are “Innocence” and “Oasis,” and the three versions of them that are now available provide some marvelous insights into the mood of the quartet on any given night. I will refrain from actually comparing all of them, for each one has its own highlights. But for the purposes of review, I must say that in Tokyo on that April night in 1979, all four members gave the tunes everything they had.

The third and final track of Sleeper’s first disc is the beautiful “So Tender,” which very prominently features the piano of Keith Jarrett. I can listen to the man play endlessly, and this tune is a great example of the reasons why. While the melody may remain, the directions he chooses to go in are always a delight. Along with “Prism,” (which appears on disc two), “So Tender” would reappear in the Standards trio Jarrett led beginning in the early '80s. Along with him in that configuration were Gary Peacock (bass), and Jack DeJohnette (drums).

But I digress. The European Quartet were a powerhouse, and the rhythm section of Danielsson and Christensen were a big reason why. Sleeper’s second disc opens with “Oasis,” and it is little wonder as to the reason why the quartet kept it in the set night after night. During a concert which goes from peak to peak, “Chant of the Soil” (14:52) is perhaps the highest. This remarkable composition allows all four members of the quartet to shine in a most spectacular way. For this listener, it is the highlight of the night.

The previously mentioned “Prism” follows, and is another delight. The concert ends with “New Dance,” another track that finds the quartet firing fiercely on all cylinders. Just as an aside, the title of the Nude Ants live recording was a play on “New Dance.” Who says master musicians don’t have a sense of humor?

The release of Sleeper is an enormous treat for everyone who enjoys seriously good jazz. Over the course of his long career, Keith Jarrett has shown a true artists propensity to try just about everything. Even a brief rundown of the various styles he has explored would fill a couple of pages. The European Quartet was a grouping that had a magical chemistry, which is unquestionably captured at one of its highest points on Sleeper. This one is a must.