A nearly perfect live album from a classic band brings sisters together... 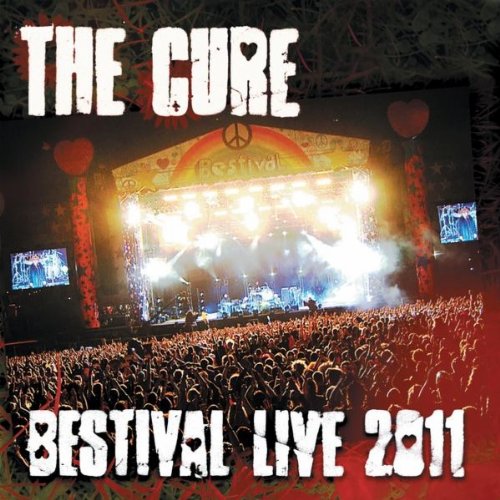 Bestival Live 2011 by The Cure was released in early December, 2011 and while I have been listening religiously since the moment I got it, even starting and scrapping multiple reviews, it took my sister’s visit last week to kick me into gear and get it done.

The clincher was when driving around town with her listening to the discs, sharing lip gloss and laughing continuously (just like when we were 15 and 19), she asked if I’d finished my review; when I answered I had not she suggested we review it together. Genius, I tell you! So here you have what may not be just the first tandem review for BBS, but a tandem review by fabulous sisters.

The Cure have released yet another live album and what sets this apart from others are the 32 perfect songs they’ve hand-picked, and knowing the proceeds are going to a children’s charity. Pretty perfect timing with the holiday season and giving to children always sweetens any gift.

The Cure are often dismissed as gloomy goth rockers that teenagers with a penchant for smeared lipstick and black clothing slit their wrists to. What I hope this live album does is remind or introduce the masses to the pure, lyrical genius that is Robert Smith.

I have reviewed a couple other live CDs in the past and the thing that made one (The B-52’s With The Wild Crowd) infinitely better than the limp L.A. Guns’ effort (Acoustic Gypsy) was not only quality and closeness of the live versions to the studio versions but the crowd interaction and participation. When the cheers and applause start to ebb into a near frenzy at the opening strains of “The Lovecats” my heart actually began to beat rapidly and I was immediately brought back to my experience with the Cure and my little sister/co-reviewer at their 1996 concert. That’s exactly what should happen on a live CD, you should feel it, remember where you were and how it felt when you experienced them live for the first time and best case scenario it should make you head out to see them on their next stop, either for the first or 31st time.

When I first opened the 2-disc set, I hurriedly glanced over the entire 32 song list to see if my favorites were there, omitted or if there were any surprises. No surprises for me, except that I could easily think of ten more songs that could have been included. That’s a testament to the lyrics as well as the musicianship; these songs just stand up and you can’t get tired of them. I’m still relegated to giddy, school girl status every time “Friday I’m In Love” or “10:15 On A Saturday Night” (drip, drip, drip, drip, drip) come on, no matter where I am, even in a FroYo shop (which has happened by the way). “Pictures Of You” (not on this collection) is still one of the most gut-punching takes on a break up or forced separation or even worse missing someone who’s still there, I have ever heard to this day. Songs like this just aren’t being written anymore.

Frontman Robert Smith ends “Fascination Street” with an emphatic “strasse!” (German for street) and it is easily one of my favorite music moments, ever. This entire set shows people who are newly discovering or rediscovering the band that there are a lot more layers and much more depth than the words “The Cure” conjure up. I actually think of them more as a happy, synth-pop group that has also written some legendarily dark, personal songs.

Whether you are new, new-again, or still in the thick of it with the band since you discovered them, this compilation truly has something for everyone, even some good old-fashioned controversy which my sister gets into below.

The Cure’s first live album since 1993, Bestival Live 2011 is a charitable release, with all proceeds going to the Isle of Wight Youth Trust. Not an anthology by any stretch, this recording more closely resembles a dream set list customized by Robert Smith and the rest of the band to be the ultimate crowd pleaser- which is exactly what a festival set should be.

The album features some of the brightest spots in the Cure’s tenure, and would be a good place to start if you’re new to the band. Its 32 tracks include songs from every Cure album up to 1992, with a few tracks from 2008’s 4:13 Dream for good measure. Fans of later-‘90s/’00s Cure may feel left out, but “old-school” listeners will be pleased by the nostalgia trip.

Standouts include an ecstatic version of “Push,” a very rare live performance of “The Caterpillar” and “The Hungry Ghost,” a buried gem from 4:13 Dream. (Speaking of songs from 4:13 Dream, am I alone in feeling somewhat icked out by the “hips” and “skin” lyrics in “The Only One”? TMI, Uncle Robert.)

The sound quality is excellent, the band is tight and Smith is in good voice, reaching for and making most of his high notes, punctuating songs with signature whoops, dips and howls. These guys have been playing a long time (even the “new kid,” drummer Jason Cooper, has been on board since ’96), so it’s worth noting that they are doling out some truly infectious energy here (If you’re not dancing around your kitchen to “Hot Hot Hot!!!” then clearly…you are not me).

The performance closes out with a seemingly new tune called “Killing Another,” which, disappointingly, isn’t new at all. Rather, it’s a self-censored version of their staple “Killing An Arab.” I was pretty offended by this (ironic, right?). Censoring the song after standing behind it for 32 years seems weak, and closing out the album this way only multiplies the effect (For the record, the song is about the classic Albert Camus book The Stranger).

Bestival Live 2011 sounds great and offers up a big slice of classic Cure. It’s a solid testament to the band’s abilities, but not essential listening if you’re already familiar with live Cure, and the self-censorship may leave you feeling cold.